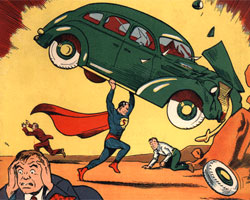 Action Comics #1, one of the rarest comic books in existence, has fetched the record US$1 million at auction, which more than doubles the previous record for a comic book.

Issue #1 of Action Comics marks the first appearance of Superman, and was first published in April 1938 (as a June issue) for a cover price of 10 cents. The auction was conducted by online company ComicConnect.com, which was sold to an anonymous New York-based buyer just one minute after the auction was posted.

The issue in question was graded by an independent firm called CGC, which gave the book a rank of 8.0 out of a possible score of 10. Even minor imperfections, damage, or even restoration efforts can drastically lower a value of a vintage comic book.

Superman was created by American Jerry Siegel and Canadian Joe Shuster. It is estimated that only 100 copies of the original run of Action Comics #1 remain today (there have been numerous reprints), and few can be categorized as 8.0 (very fine) or higher.