After serving more than 38 years with various Mitsubishi divisions, Takefumi Suzuki becomes the President and Chief Executive Officer of Mitsubishi Imaging Inc., which operates in North and South America. 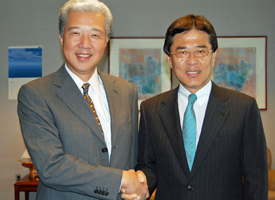 Suzuki first joined the Mitsubishi group of companies in 1972 when he took on a position with Mitsubishi Paper Mills (MPM). He eventually reached the post of Director and Managing Executive Officer with MPM, but in 1995 this entity was merged with Mitsubishi Corporation to form a new division called Mitsubishi Imaging, which is now headquartered in Rye, New York – a 27,000-square-foot facility with a Technical and Training Center.

Suzuki succeeds Yutaka Oka, who after more than three years of service with Mitsubishi Imaging, has taken the position of President of Mitsubishi Paper Holding (Europe) GmbH in Germany.