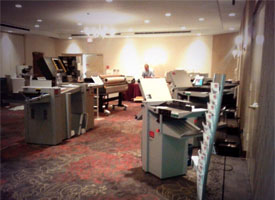 Earlier this month, finishing equipment vendor Sydney Stone presented the second of its eQuip travelling trade shows in Barrie, Ontario. The previous show was held in Cambridge, Ontario in June.
The company demonstrated new supplies and finishing equipment, including the Watkiss Power Square 200 booklet maker and the Matrix 530 laminator. Popular with the attendees was Sydney Stone’s new Gallery Wrap Framing System and Canvas Laminate, which gives paper prints the look and feel of canvas.
“We want to be as accessible as possible, for our customers to know that we want to be there for them,” said Sydney Stone Sales Director Michael Steele. “Not everyone has the time or the ability to travel to a trade show in a major city centre or visit the Sydney Stone show room in Toronto.”
Sydney Stone says it plans on presenting three more shows in Ontario this year, in Ottawa, Hamilton and Oshawa. Dates will be forthcoming.
Print this page