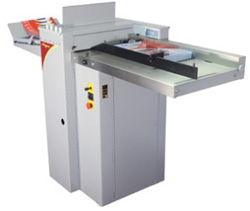 At Graphics Canada, beginning this Thursday in Toronto, Sydney Stone states it will present the Canadian tradeshow debut of the Morgana DigiFold 5000P. First released in 2003, the most-recent upgrade to the DigiFold includes Morgana’s patented “flying knife” technology and DynaCrease, which help to increase the system’s speed to over 5,000 A4 sheets an hour.

At Graphics Canada, Sydney Stone will run two booths with equipment demonstrations. At 3601, the company is focusing on the latest in Duplo, Morgana, EBA, and Challenge products. This will include the Duplo System 2000 and DSF 2000 bookletmaking systems. The other booth, 3806, is centred around Sydney Stone’s Certified Series of reconditioned equipment. The company plans to have 20 pieces of reconditioned equipment on the booth, such as paper cutters, folders and bookletmakers.

Sydney Stone is also holding a draw at Graphics Canada in which entrants can win $1,000 in supplies.