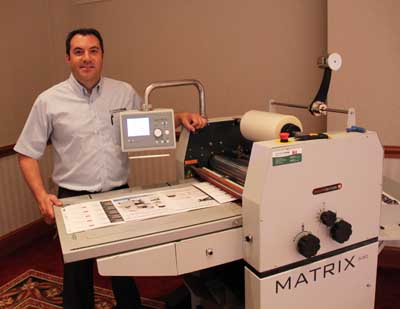 The new generation of EBA cutters are also available with larger cutting widths to accommodate the increase of larger format toner systems, with the ability to handle 14 x 20 and 14 x 12 inch sized sheets.

A day before the Richmond Hill event, Sydney Stone announced it would begin distributing the new Duplo DC-616 system for slitting, cutting, creasing and perforating primarily short-run toner work. The DC-616 can run 24-up business cards on a sheet based on a new design that positions the trimmer near the end of the unit. It can process up to six slits, 25 cuts, and 20 creases in a single pass.

Two models are available, including the basic version and the DC-616 PRO which comes standard with PC controller software and PC Pole Mount for easy job setup, CCD scanner to read barcodes and registration marks, ultrasonic double feed detection, and a perforating unit.

During Equip 2014, Sydney Stone also demonstrated the recently released (July 2013) Watkiss PowerSquare 224 booklet maker. It is rated to produce stitched square-back books of up to 224 pages thick, as well as the double-sided Matrix 530 laminator, which allows users to apply heavy pressure to the sheet. Sydney Stone featured around 20 technologies at its events, including Morgana creasing and folding systems.