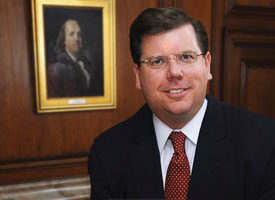 Tapella was appointed to lead the Government Printing Office (GPO), one of the most influential printing entities in the world, by former President George W. Bush in 2007. Tapella, who becomes the 25th Public Printer of the United States, has been with the GPO since 2002 and previously served as a staff member in the U.S. House of Representatives.

While Tapella is scheduled to kick off EFI Connect on the night of April 18th, Joan Davidson, Group President of Sheridan Publications Services, will provide a second keynote on the morning of April 20th. Davidson is a recent recipient of the NAPL Soderstrom Award, and previously served as Chairman of the NAPL Board of Directors.

EFI Connect is scheduled to run from April 18 to 21 at Wynn Las Vegas. The conference, with over 120 break-out sessions (see link below) is designed for users of EFI technology – Monarch (Hagen), Pace, PrintSmith, Logic, PSI, Fiery, VUTEk, Rastek and Jetrion.