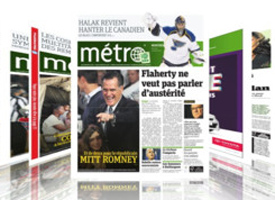 “This acquisition is excellent news for TC Media and our clients, advertisers and readers, since it will enable us to enrich the content we provide,” stated François Olivier, interim president of TC Media and President and CEO of TC Transcontinental. “It will also increase the advertising opportunities for Metro Montréal, primarily through links with other TC Media products, which should create new and interesting possibilities for our advertisers.”

The company describes its new sole ownership of the Montreal paper as a natural fit, after Transcontinental was the driving force behind its launch back in 2001. Introduced as a commuter newspaper, Metro has expanded its presence in Montreal over the past decade, supported by the recent released of iPhone and Android apps.

Today, the paper reaches more than 245,000 readers a week, Monday to Friday. Metro now has a staff of 17 local journalists, while also accessing a worldwide network of more than 500 journalists through its continuing relationship with Metro International.

TC Media states Metro Montréal will play an active role as a supplier of local, national and international content on various media platforms, including the new morning show Ça commence bien! produced by TC Media, which is to air on V this fall.

“Metro Montréal is proud to belong entirely to TC Media and thus be able to play a pivotal role in the development of TV productions, taking the paper to new heights,” said Daniel Barbeau, publisher of Metro Montréal. Transcontinental also has ownership interest in the Metro counterparts of Toronto and Halifax, which Barbeau says will help with national advertising opportunities.

The existing management team will remain with the paper. Metro Montréal is the only daily paper in North America that is printed on FSC-certified paper.