Features Chronicle Opinion
The art of being credible

Life as a certified equipment appraiser 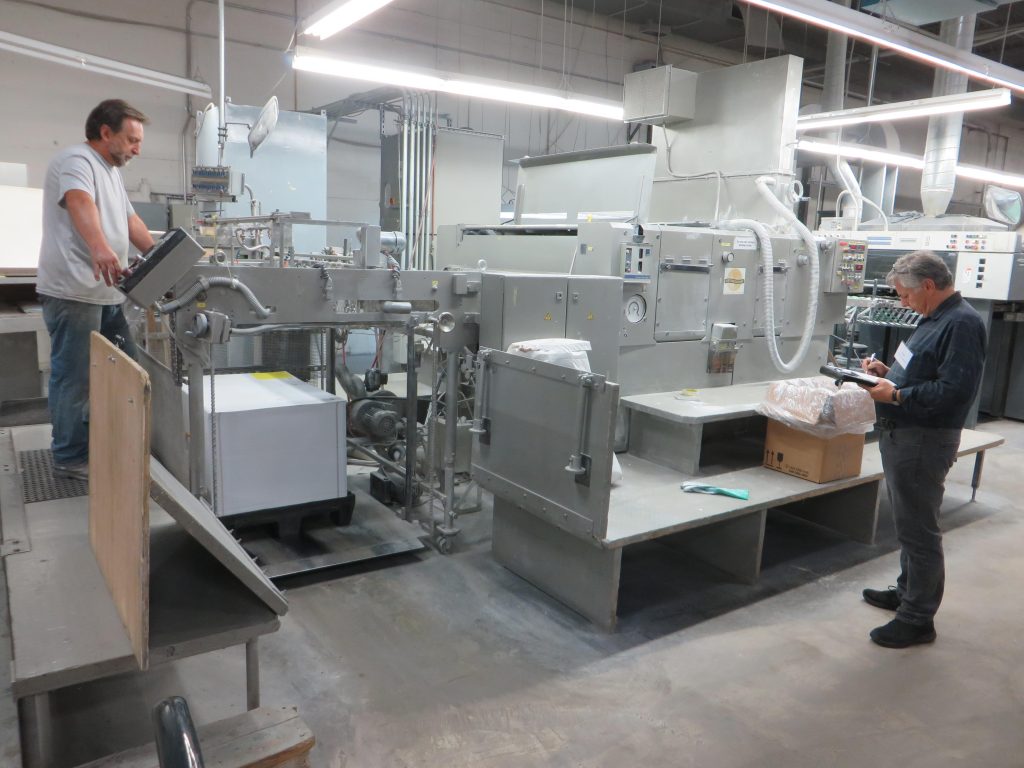 “Today is an ideal time to spend some money and have my plant appraised”—no printer has ever said that. Regardless, today’s plant and machinery appraisal industry is substantial and essential. Trained specialists are deployed to access and verify plant machinery to determine condition and worth.

“Credible” is the keyword when preparing an assignment, just as is expert knowledge of a specific industry. I’ve been carrying out plant appraisals for over 40 years, and, almost exclusively, for the print communications industry, although anything from five-axis machine tools to a winery have been part of recent assignments.

There are good arguments to be made in support of an appraisal. Banks and leasing sectors insist on a valid and certified opinion of value and often turn to professional appraisers or auction companies, most of which offer this service. Although it’s always possible to guess a value, lenders prefer professional evaluators who hold accreditations with an accepted appraisal society or foundation. Becoming an accredited appraiser requires industry experience, study and constant training since regulations constantly change.

The joint U.S. and Canada benchmark standard involves a thorough understanding of Uniform Standards of Professional Appraisal Practice (USPAP). The Appraisal Foundation, a recognized source of appraisal requirements, developed USPAP after the savings and loan crisis in the early 1980s. It is designed to tighten up the responsibilities and ethics appraisers must follow. However, USPAP doesn’t provide the appraiser with specific know-how on arriving at a credible conclusion, but rather the proper procedures and responsibilities each appraiser must conform to. Essentially, it’s to ensure members impart fair, balanced and truthful assignments that are void of misinterpretation or bias.

The need for USPAP and continual updating of rules and ethics took on new meaning during the subprime financial meltdown of 2008/09. It became painfully obvious USPAP had to be updated when thousands of real estate assessments, well short of the mark, turned out to be lacking credibility. Only after home foreclosures fell off a cliff did some funders discover valuations that were biased at worst and incompetent at best. Some local lending offices, in their eagerness to close mortgages held rather unhealthy symbiotic relations with appraisal firms who didn’t understand the word “no”. As house values took flight, no one considered that both the appraiser and bank played a role in what seemed “perpetual-motion” accounting. The dollar value index only pointed up: Today’s home, at say $400K, was tomorrow’s assessment at $425K.

For the appraiser, there is a great temptation to acquiesce when lenders and, especially, potential purchasers of a business make insinuating comments as to where they “hope” to end up and how they wish the valuation comes in at a number that will let the transaction proceed. Many of my appraisals have received a similar preamble. Although I listen intently, these comments would never affect my conclusions. Impartiality is also why lenders have no interest in considering a manufacturer as an appraiser, even though the company may have produced the asset.

Appraisals don’t always just provide a financial value, they can include an asset’s condition and usefulness. Software, now a key element of a machine’s operation, is expensive. However, perhaps surprisingly, software often retains no monetary value in an appraisal, as systems under assessment are older or licensing restrictions negate a transfer to another firm. Just like dry ice on a hot summer day, the software only has monetary value before it’s installed.

A particular example of this is in Canada. One of the world’s largest digital equipment manufacturers usually leases their equipment. However, because of lower finance rates, printers are outright purchasing instead. This manufacturer’s contract has buried in small print a clause that precludes a buyer from actually owning the intellectual property (IP), even though the buyer owns the hardware. If that same buyer attempts to sell his machine (in Canada), the manufacturer will initiate hefty fees to re-certify and/or permit their software to be used. Not only does this severely affect a machine’s value, but also kills any transaction unless the manufacturer is involved.

Printers can take many steps to maximize their asset’s dollar valuation. The initial appearance of the plant, offices and machinery is important. Messy shops and filthy machines are a drag on valuations, particularly if the equipment is only a few years old. I recently appraised a two-year-old 140-in. inkjet roll-to roll that had filthy ink tanks. Also, the flushing tank looked like someone had thrown a gallon of ink at the machine. Regardless of performance, poor housekeeping is often reflected in an appraisal. 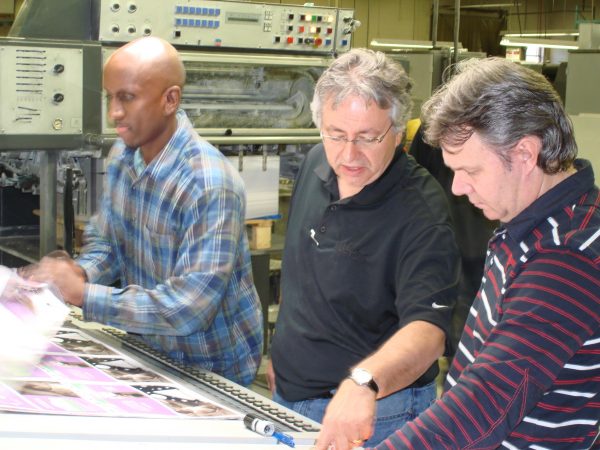 A Heidelberg Speedmaster 102 is being apprised in Toronto.

Depending on the degree of an appraiser’s knowledge it’s pointless to provide a “Walt Disney” tour, pointing out what you believe to be relevant about the equipment. Often this is the case when I arrive at a plant. Sometimes, the printer would provide a list but I rarely use them, as I insist on verifying everything myself. Once, a funder called to clarify the serial number of two assets. I confirmed the numbers. After some investigation, the funder realized the serial number was noted incorrectly during a previous appraisal. The resulting mix-up went on to generate substantial work to re-register these assets. If they had not caught the error the funder could have lost all legal rights to the chattels.

A large sheetfed manufacturer has been buying LCD sheet counters, since about 2002, with a flaw. These counters are installed to record the total impressions of a press, but when a $3 lithium battery is depleted, the counter’s display goes blank. The total use of a particular press is now unknown. If accurate (service) records are kept, the technician might have written down the impression count. Today, when I see machines of this builder with very low impression counts, I know the reason. Use is a major input to valuation dollars and opens up the potential for deceit if attempting to sell a press with more impressions than advertised. Knowing how to access the overall condition is key for the appraiser, as he or she has to be familiar with wear and tear.

Over the years, I’ve carried out assignments for various interests and across North America. The majority have been lenders and businesses buying or selling to each other. However, I also have had some avant-garde files.

One rather memorable, and with hindsight slightly humorous, episode occurred in the northwest United States, where I completed two appraisals for that state’s justice department. Two of the largest printers were involved in litigation with the revenue department over tax-related asset book values. On arrival at one of the businesses, a group of government staff and I were sequestered in a boardroom awaiting to be escorted around the facility by a senior member of the management. It seemed as if we were in that room for hours and since a massive amount of work was involved I could sense delays in what was already going to be a long couple of days. We were finally given a frosty reception when the executive turned up.

I went to work with the gaggle of five accountants and attorneys in tow firing off questions in my direction. The plant was a substantial web and bindery facility. Late in the day, as we neared completion, the executive turned to us and asked, “anything else?” I quickly mentioned the pollution control equipment and suddenly he opened a side door through which we all shuffled out to a rear parking lot. Once outside, he strode up to each of us and unsnapped our visitor passes while muttering, “Here’s the door: over there is what you wanted to see.” Without another word the man spun on his heel and disappeared with the door slamming shut behind him. There we were, standing in a parking lot wondering what had just happened.

The West Coast file isn’t typical but did have one thing in common—plenty of variety, and, if you love to travel, then that too. Another assignment provided both when I was assigned to appraise the largest printing operation in Atlantic Canada. This involved 12 individual plants across four provinces. Just the physical process of travel kept me away from the office for more than a week. The plants ranged in sophistication from large web, sheetfed and bindery to small-town businesses. Hundreds of miles later I managed to complete the inspections and fill several binders. Not only was each facility unique, but also the individual management styles varied, with some plants highly organized and using up-to-date management tools while others looked like they were stuck in the 1970s. Just as I was to fly from Halifax to St John’s, a once-in-a-decade snowstorm hit Newfoundland and I was stuck in the airport for a day.

Whether it be one company buying another, a loan for a new piece of equipment, estate planning (especially if families and real estate are involved), or tax matters, a good appraisal firm, fluent in print technology, can handle the assignment.

Today, an appraiser must also be conversant in the new technologies appearing on shop floors. For me, it’s obvious how our industry has changed so rapidly, as I appraise more digital (both inkjet, dry, and liquid toner) platforms than offset. The large format and point-of-sale businesses have blossomed, and with it an increase in cutting tables and routers. The bindery has also changed considerably as traditional manufacturers of large signature work are purchasing lighter duty equipment designed for speed and short runs.

All this digital technology contains wide variables in value retention as compared to older traditional equipment of the 1990s. In many cases, depreciation is swift and suppliers are investing massive resources into research and development. This pattern will only increase because digital is the future. However, without a credible and accredited appraisal, our financial sector cannot function with a sense of assurance and continue to support the printing industry.

This article originally appeared in the May 2021 issue of PrintAction.