Headlines News
The Onion to Come to Toronto 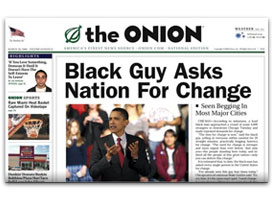 The Onion, a long-running satirical weekly newspaper based in Chicago, will be making its way up to Toronto. The organization announced a partnership with the Toronto Star to publish a localized version for the Toronto market.

“The Toronto Star is pleased to enter into this agreement with The Onion,” said John Cruickshank, Publisher of the Star and President of Star Media Group in a statement. “It is an agreement that benefits both companies and provides the Star‘s business-related teams with another publication to offer to audiences in the Greater Toronto Area.”

“Toronto has long been one of the Top-10 cities for The Onion‘s online audience,” said Steve Hannah, President and CEO of Onion, Inc. “I think it’s the perfect place for The Onion and A.V. Club to make their first foray outside the United States. Toronto has a tradition of great comedy as well as being a really smart, cosmopolitan city that has a natural audience for our pop culture coverage as well.”