Features Chronicle Opinion
The remarkable birth and evolution of the Speedmaster 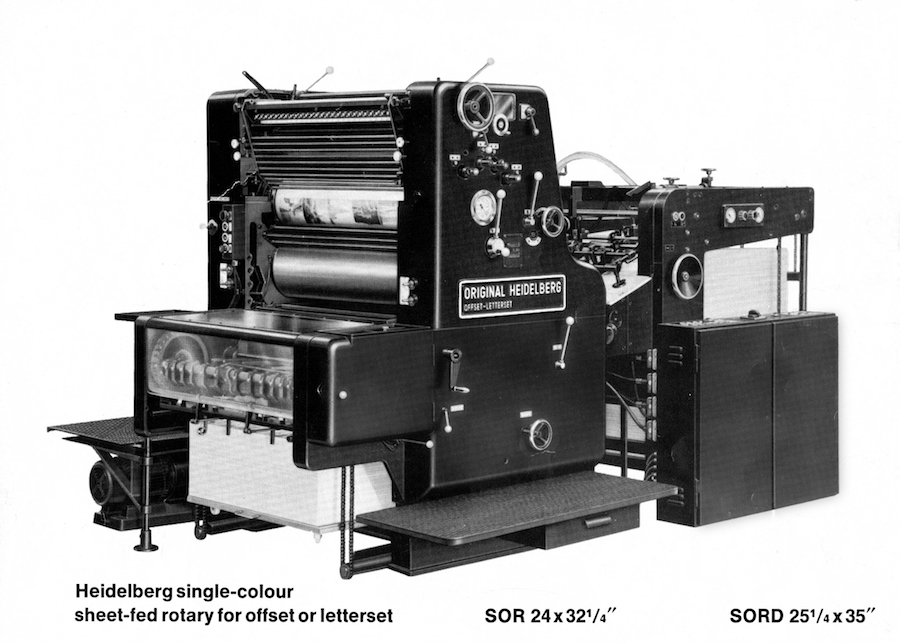 Inside the offices of Schnellpressenfabrik AG, Heidelberg frustration not seen since the firm’s founding in 1850, filled the hallways of power. A new crop of young executives grew impatient with their boss, Herbert Sternberg. The year was 1961. Heidelberg Druckmaschinen, as the company would soon be renamed, had never entered the offset field. Sternberg was stubborn and believed the future would always be letterpress. After all, Heidelberg was sitting on top in this key sector.

At the upper levels of management, Sternberg had a loyal following. Artur Büttner was well ensconced as chief designer and between the pair, they shared almost 50 years of experience working for Schnellpress. It was Büttner who had led developments of both the T-platen and the OHC cylinder press. Schnellpress had recently added rotary letterpresses to its arsenal – using relief letterpress plates – but this didn’t qualm the younger executives. One who had experience and could see that the future would be in offset was Willi Jeschke. Jeschke had arrived at Heidelberg from M.A.N. in 1956. Soon after, Dr. Wolfgang Zimmermann would be added and the youth was about to force Herr Sternberg to make a radical decision — build a damn offset press!

Taking the existing KRZ rotary model, the engineers made quick work to modify it into Heidelberg’s first offset press. Designated the KOR, or Klein Offset Rotation, the model in the 40 x 57-cm sheet size sold incredibly well when shown at drupa 1962. Heidelberg never looked back and when the K Offset era ended in 1985, roughly 40,000 machines had left the Wiesloch, Germany, factory.

Offset was becoming a major growth industry. Numerous companies were in the business – especially small four-up sizes, but it soon became obvious to Heidelberg that the small KOR had its limits. A larger press, known as the RotaSpeed, would also be redesigned from wrap-around letterpress into an offset. This press, with a sheet size of 71 x 102 cm was supposed to be Heidelberg’s ticket into the lucrative offset B1 segment. In 1965 this model, showcased as a two-colour RZO, would make its appearance at TPG in Paris. But the RZO quickly turned out to be a beast. Although it looked great and presented some interesting features, such as five form rollers, the RotaSpeed was awkward to work on. Designed with mirror image print units, the press used a troublesome Spiess BX feeder head and avant-garde grippers instead of belts on the feedboard. This made feeding some papers, such as label stock, challenging.

Only Roland had success using a chain transfer system and for some unfathomable reason, Heidelberg sought to replicate the concept as it would have been much cheaper than traditional cylinders and gears. With stretched chains causing havoc, even adding “register racks” did not eliminate mis-register. By 1967, a new transfer base was designed with cylinders. The writing was on the wall — the RotaSpeed had to go. Thankfully in 1976, Heidelberg put the RotaSpeed out of its misery. Fortuitous for everyone, 1975 was the year Harris-Intertype exited the sheetfed business. Losing such a large competitor was a godsend for Heidelberg and the company knew it’d have to find a better solution before the likes of Miller and Roland gobbled up market share. Or did they already have something?