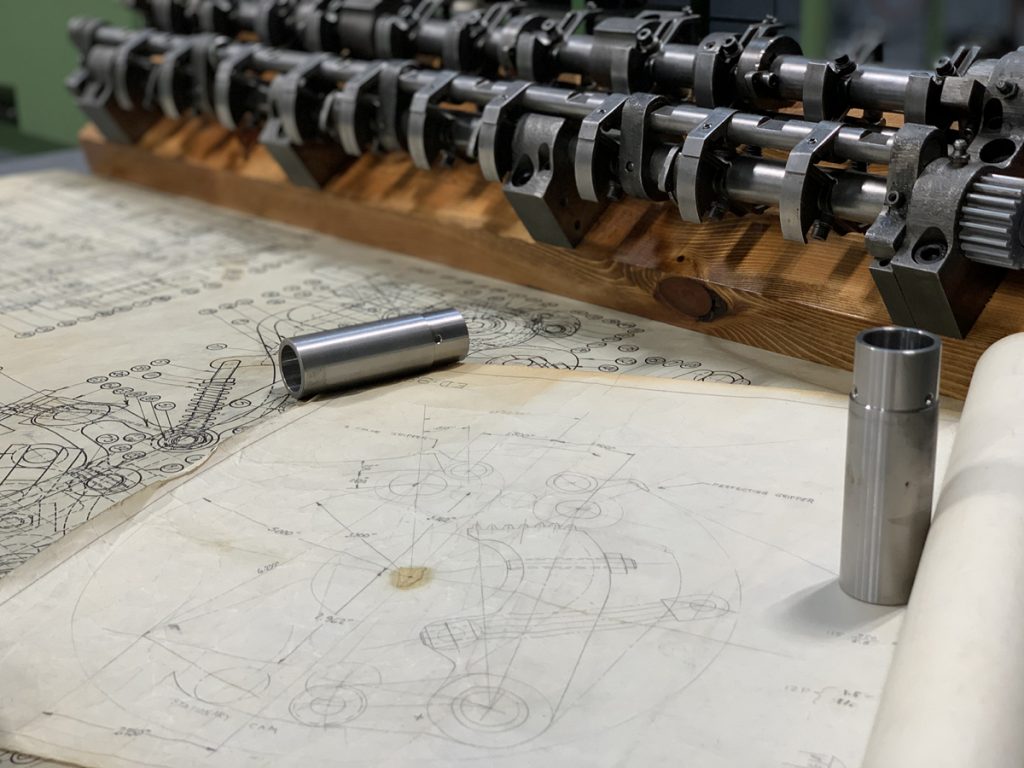 A HAND-DRAWN MECHANICAL IMAGE OF THE FIRST PERFECTOR, WITH A PERFECTING DEVICE IN THE BACKGROUND. PHOTOS: NICK HOWARD

Between 1906 and 1918, in Long Island, N.Y., William Gegenheimer set out for work expecting to spend his days installing and repairing Harris Automatic offset presses. During this time, William not only worked for Harris, but also ran a press in a local printshop. Gegenheimer was at the genesis of offset press development as Harris only started shipping their first offsets in 1906. But the physical side of printing wasn’t going to do much more than put food on the table. Gegenheimer saw himself as an inventor, and as the First World War was coming to an end, the printing industry needed new ideas!

Starting a business amid a Depression
In 1918, William set out on his own to form William Gegenheimer Offset Press Engineering, later changed to Baldwin-Gegenheimer Corporation, adding his home-town name to the company masthead. William would enter a potentially lucrative business of designing offset press enhancements, and in 1927 a novel inker wash-up device was patented. Initially the press washer was slow to sell, but as word spread, everybody wanted one. Early attempts at forging alliances with press manufacturers soon paid off and virtually all new U.S. presses were equipped with a Baldwin wash-up device.

William had a son who would eventually overshadow the old man. Harold Gegenheimer worked part-time in the Brooklyn shop, and while still barely a teenager it became evident that he was destined to be a mechanical engineer. Off he went to Georgia Tech, where he graduated in 1933. 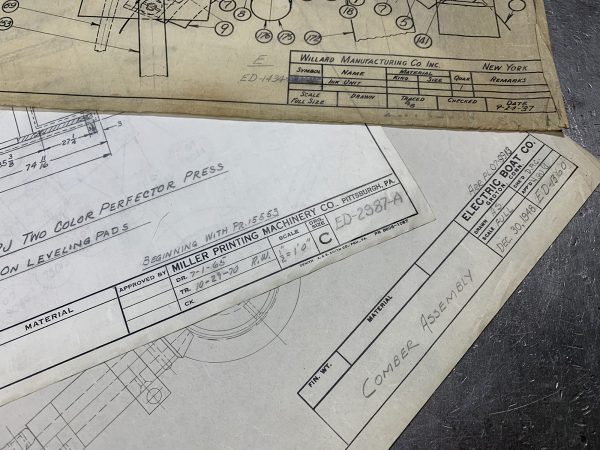 The Willard: right press, wrong time
On Harold’s return to New York City, he found his father designing and constructing a new offset press. The single-colour offset took a sheet size of 22” x 34” and offered two types of infeed: feed-roll or three-point register (transfer grip from lay to impression). Two years later, in 1935, the new Willard prototype press would be completed and a new company, The Willard Manufacturing Corporation, was formed in New York City. Harold had jumped right into working on the Willard after college and there was great hope that the press would catch favour. However, while previously the Gegenheimers had symbiotic relationships with the big press manufacturers, the Willard press now made them competitors and therefore outcasts. With the U.S. and most of the world still in the grips of the Great Depression, 1935 was also the worst time to be spending money, let alone offer something new to an industry struggling to keep its doors open.

1946: the financial floodgates opened and the war was finally over
As war approached, the prognosis for survival seemed bleak, and there is no record of anyone purchasing a Willard. But as the war ended, many defense industries started to look around for new opportunities in a more peaceful world.

Scan of an advertisement for Electric Boat (EB Co) in 1947.

In 1946, the Willard Manufacturing Corporation would be sold to Electric Boat (today General Dynamics Electric Boat), which seemed to now be in the printing press business. The Willard name would be retained, now referred to as the EB Co – Willard. Probably due to lack of business, Harold Gegenheimer had already left his father several years before the Willard sale; first working for ATF-Webendorfer, and then Rutherford Machinery. With capital now behind the new press, Harold Gegenheimer would return and be appointed division manager of the Printing Press division at Electric Boat. That same year (1947), Electric Boat announced its first sale to Ardlee Service Inc. It took 12 years after the Willard was designed to finally find a buyer. As it turned out, plenty more EB Cos would follow, well into the mid 1950s.

Harold was a gifted engineer, and it wasn’t long until he designed a larger two-colour press. However only a few years went by until the new atomic threat from Soviet Russia fell over the west. Electric Boat went looking for a buyer for their printing division. In 1952, EB Co found an ideal suitor.

The right time and the right place: Miller’s smart move
The Miller Printing Machinery Co. was primarily a cylinder letterpress builder. Miller once manufactured gravure web presses and owned a specialist valve manufacturer. But print’s future would be offset and the chance to purchase the EB Co press provided Miller with a ready-to-sell platform. In 1952, Miller officially joined the offset business.

Harold Gegenheimer was still working on his two-colour when a year prior (1951) he decided to return to Brooklyn and his father’s fledgling wash-up and now water-leveler and water-stops business. He had not only been designing a new offset press but a radical new mechanism to turn over or tumble a sheet of paper while it sped between two printing units.

The Miller Company and Harold Gegenheimer soon spent a great deal of time together. With the assistance of EB Co’s engineer, Carl Siebke, Gegenheimer hand-drew a concept that was assumed impossible at the time: a convertible perfector. In 1950, the only possibility of printing both sides of a sheet was upper and lower units with a common gripper in a blanket-to-blanket arrangement. This type of press was only a perfector and not nearly as versatile for penny-pinching printers. Of course, Miller would also enjoy exclusive use of the technology for years, maybe decades!

Gegenheimer’s perfector broke just about every rule of printing press design. It’s important to mention that a 1952 offset press already had plenty of adventurous register and chemistry problems. Gegenheimer and Siebke’s design had an uphill battle getting refined and completed, especially after failed tests, which were numerous.

For the perfector to be completed there had to be a second cylinder to adjust for various sheet sizes, with vacuum suction holding the tail of the sheet. The vacuum would act as a mechanical gripper when transferring the tail to the third perfecting cylinder. But most importantly, the entire job had to hold hair-line register. The same year Miller took possession of the press, a patent application bearing both Gegenheimer and Siebke’s names was filed in the U.S. Four years later, on August 7, 1956, the printing industry changed forever. A U.S. patent was granted and assigned to Miller. Siebke would go to work for Miller and, over the next decades, continued his print-related inventions.

The TPJ would forever shake the printing industry
Harold Gegenheimer remained with the Baldwin-Gegenheimer Corp and led the business while inventing new tools for sheetfed presses and the roaring web offset sector. I was fortunate to meet Gegenheimer in 1982. I recall him as a soft-spoken, warm man who seemed to have time for everyone. His openness made me muse on the full extent of his genius, not only as an inventor, but as a corporate leader. Gegenheimer died in 2006 at the age of 95, having led Baldwin’s products into virtually every printing company around the globe.

Miller at first struggled with the Gegenheimer perfector. They didn’t have a completed workable two-colour and no major improvements to the EB Co, either. In 1955, Miller became the U.S. and Canadian distributor for MAN Sheetfed. 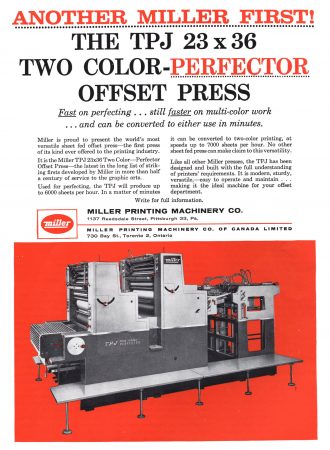 The difficulties finally ended when in 1958, Miller introduced the world’s first convertible offset press in the TPJ. This new design, including Gegenheimer’s revolutionary perfector, was offered up as a two-colour 23 x 36-inch. In early 1962, Miller announced the 25 x 38-inch TP-38. The TP-38, enhanced over time, would become the mainstay of the Miller lineup for the next 28 years and ultimately bring about the TP-104 platform; the last press design before Manroland purchased all Miller U.S. and German interests in 1990.

For 17 years, Miller held the convertible-perfector advantage, but in 1975, once Heidelberg’s perfector hit the market, Miller’s days of dominance were numbered.
Today the press of choice in the commercial print sector is an eight-colour perfector. Every manufacturer licensed or have reverse-engineered some portion of Gegenheimer’s 1956 patent. Certainly, vast improvements have been made during the last 64 years, but the essential fundamentals remain unchanged from 1956.

Convertible-perfecting is possibly the most important development ever invented in the offset printing industry. The Gegenheimer invention further epitomizes America at its finest. The next time you walk near that new or old perfector, take a moment to salute two guys and a nuclear submarine manufacturer who defied logic.

This article was originally published in the March 2021 issue of PrintAction.