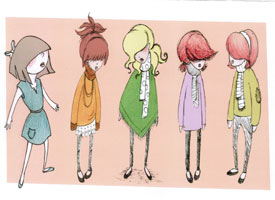 Markham-based Sina Printing has made a donation in print which helped send a local-area student to a internship at Nickelodeon Animation Studios in California.

Kasia Niton, a student of Sheridan College’s Bachelor of Applied Arts Animation Program, earned a hard-won internship at the Nickelodeon Studios of Burbank, California, home of shows such as Dora the Explorer, Spongebob Squarepants and Jimmy Neutron. She designed a card which she sold to raise funds for her trip.

“We are proud to support Canadian talent,” said Mike Meshkati, President of Sina, who donated the printing of the card. “We were pleased to donate the production of a beautiful greeting card designed by Kasia to showcase her skill, and raise money to finance her time away from home. Best of luck, Kasia!”

Kasia has almost reached her funding goals and would welcome further donations. She has an online portfolio of her works, which can be viewed here.