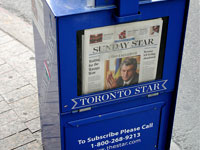 The Toronto Star has reported it has reached an agreement with the union representing its editorial employees to reduce its staff by 35 instead of outsourcing page production.

In November last year, The Star proposed a reduction of 70 full-time jobs which would’ve also seen the company outsource some of its page production to a subsidiary of The Canadian Press. The savings would have been $4 million annually.

The new agreement would see page production remain at The Star, but 35 jobs will still be cut from editorial. The editorial department of the paper is comprised of 380 people out of a total 1,300 people at the newspaper in total.

“Regretfully, this alternative to contracting out will still result in a number of layoffs in the newsroom, with details on specific numbers to be communicated as soon as possible,” said Publisher John Cruickshank in a statement to the staff.