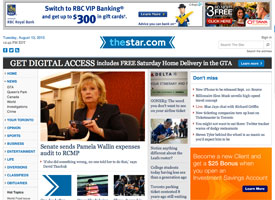 The Toronto Star, Canada’s highest circulation newspaper, has begun limiting access to content on its Website. Starting today, readers will have to pay to access more than 10 articles a month. While an introductory offer will give online readers access starting at 99 cents, the full price will be $9.99 a month. It is the last of Canada’s major dailies to do so.
As a part of the offer, Toronto-area readers can receive a print copy of the Saturday Star with home delivery. Current home subscribers will have free online access, as long as they are subscribed using an automated payment option.
Last year, Canada’s two national newspapers, The Globe and Mail and the National Post rolled out their own paywalls. The Globe and Mail charges $20 per month for unlimited online access and The National Post charges $9.95.
In 2011, a survey of 1,700 Canadians by the Canadian Media Research Consortium found that 81 percent would not pay to read news online and 90 percent indicated they would seek free alternatives if their preferred news Website started charging for content.
“Online news consumers, long used to getting their news free when production costs were mostly subsidized by print and broadcast advertising, are balking at the idea of having to pay for content now that revenues are falling below the level needed to sustain media operations across various platforms,” says Donna Logan, one of authors of the 2011 study.
Torstar, the publisher of the Toronto Star, also announced its second quarter results recently, which saw net income drop from $32.6 million in the same period in 2012 to $18 million this year. Net debt was also up $19.9 million in the quarter, totalling $187.6 million.
Advertisement
Print this page