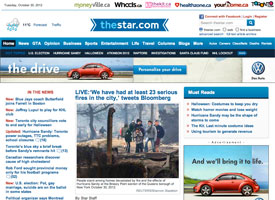 Mere days after The Globe and Mail implemented its pay system for its online content, the Toronto Star, Canada’s highest circulation daily newspaper, announced similar plans to commence in 2013.
While complete details of how the system will be implemented have not been released, the newspaper announced that most of its print subscribers will get full access to thestar.com‘s content.
“This move will provide a new source of revenue for the Star that will help support our ability to provide readers of both our print and online editions with the best and most comprehensive package of news and information in Canada,” wrote Publisher John Cruickshank. “As our digital content evolves and becomes more extensive, we believe it is necessary to supplement our print and online circulation and advertising revenues with digital subscription revenues.”
The Globe and Mail‘s pay system requires a subscription fee of $20 a month, otherwise users are limited to reading 10 articles on their Website. Viewing stories via links will not count towards the quota. Postmedia newspapers such as the Ottawa Citizen, the Montreal Gazette and the Vancouver Sun already have paywalls in place, and the group announced further implementation plans for 2013.