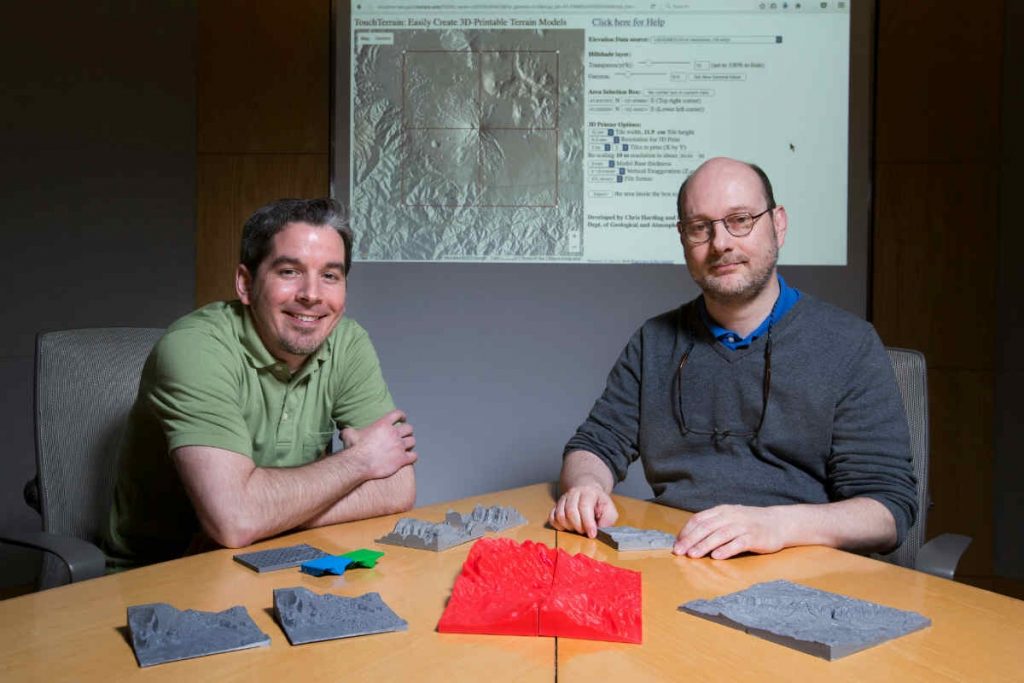 Alex Renner (left) and Chris Harding and on the screen behind them, their free, open-source Web application, TouchTerrain, for 3D printing any landscape. (Photo by Christopher Gannon/Iowa State University.)

Have you ever wondered what it looks like at the top of Mount Everest or at the bottom of the Grand Canyon? Well, Chris Harding and his colleagues can’t take you there, but thanks to their innovative work and the advancements of 3D printing, you can hold the natural wonders of the world in your hands.

Harding, an Associate Professor of geological and atmospheric sciences, is part of a research team at Iowa State University and together they have created TouchTerrain.

Essentially, TouchTerrain is a Web application that allows users to print 3D models of any place on Earth. So, instead of relying on a flat map or screen, instead of relying on 2D depictions of real terrain (like those lines which get closer together indicating a higher altitude), you can actually study 3D representations of mountains, canyons, the ocean floor and the Canadian Shield, among any geological feature, with a hands-on model.

In the TouchTerrain program, you just select a rectangular section on a map and enter in your 3D printer’s parameters (Harding and his team have used a Makerbot Replicator 2x and Flashforge Creator Pro). Then the server downloads the elevation and terrain data through Google Earth Engine and downloadable STL files of that area are created.

The project started in late 2014, Harding says, when his colleague in the department of geological and atmospheric sciences, Franek Hasiuk, got some experience working with the Makerbot Replicator 2x 3D printer in his lab and mentioned the idea casually.

“I think he said ‘wouldn’t it be cool if everybody could 3D print the landscape they live in and hold it in their hands?’” Harding says.

Harding and Hasiuk launched TouchTerrain with the help of Levi Barber, the IT wiz instrumental in the coding of the project and Alex Renner, a Ph.D. student in mechanical engineering. Harding says Renner was a “big help” in teaching him how to create 3D models reliably and efficiently on low-cost printers.

Since the program went public in mid-March, Harding says TouchTerrain had over 2000 3D terrain model downloads in the first two weeks. The team has also received a lot of positive feedback and interest from high school teachers, university professors, museum curators and geoscientists.

“They see value in using 3D-printed terrain models in an educational setting,” Harding says.
In addition to producing 3D models of the wonders of our world, Harding has also experimented with those of other worlds, such as the Moon and Mars. He recently received a request from a teacher at a school in California which caters to visually impaired students.

“Besides giving them the ability to touch the shape of the Grand Canyon,” Harding says. “I also hand created a 3D model for the hugely impressive Valles Marineris, which he printed and gave to his students to explore.”

The TouchTerrain team is currently in the process of expanding. The project is growing faster than they can keep up with and Harding says they have already begun to experience issues with scalability when many users are trying to access the system. They are hoping other programmers will provide feedback to improve the codebase and are searching for the funding required to bring a Web programmer in on the project.

“In addition to better scalability, we have a whole list of improvements we would like to see based on user requests,” Harding says.

TouchTerrain is an open source project hosted at GitHub which provides code for the Apache server run at Iowa State and a standalone version. You can access the TouchTerrain code at https://github.com/ChHarding/TouchTerrain_for_CAGEO or check out the server version in action at http://touchterrain.geol.iastate.edu/. Harding and his partners provide the service to educators and the general public free of charge.

“We hope that printing out these models and using them in a teaching context means that ideally more people become aware of 3D printing and how useful and affordable it can be,” Harding says.