Entering its 41st year of operation in 2012, Tower Litho added a new HP Indigo 7500 press to its sheetfed-offset production capabilities housed in a 25,000-square-foot Toronto facility. 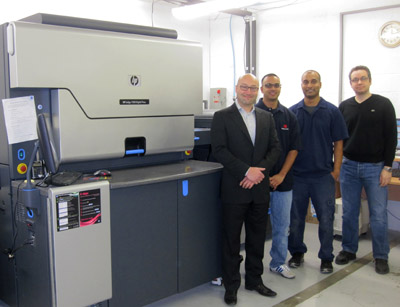 The company’s HP Indigo 7500 press, which was moved into the plant in late 2011, holds seven ink stations. According to HP, this allows for 4-, 6-, and 7-colour PANTONE emulation – matching up to 97 percent of PANTONE colours.

With its colour control capabilities and improved turnaround, Tower Litho also notes how the HP Indigo 7500 press has expanded the company’s print applications. “We’ve been successful in printing on plastic, a material we were unable to print on using our previous technology,” stated Andre Soriano, IT Manager at Tower Litho. “This has opened the doors as to what else Tower Litho can offer our clients.”

In addition to packaging, Tower Litho is using the HP Indigo to produce short-run jobs like brochures, booklets, media kits, magazines and annual reports. The press reaches a top speed of 120 A4 pages per minute (ppm) in full-colour or 240 ppm in monochrome or two colours.