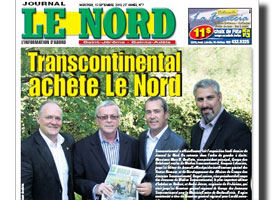 Transcontinental Media has acquired Group Média-Business Inc, publisher of Journal Le Nord, a weekly newspaper with circulation of 50,000 serving 12 municipalities in the Laurentians.

“Transcontinental is committed to serving local communities, and with today’s announcement, we truly cover the Laurentians with three titles: Le Nord, Point de vue Sainte-Agathe and Point de vue Mont-Tremblant,” said Serge Lemieux, Transcontinental Media’s Vice President, Newspaper Division, Québec and Ontario. “We are proud that these publications and their online counterparts are at the heart of what’s happening in the community by allowing local residents and business to stay in the know and the now.”

Groupe Média-Business was owned by François Laferrière and employed 15 staff members, all of which are now part of Transcontinental Media. Transcontinental Media now publishes 64 community newspapers in Quebec with a weekly circulation of over 2.5 million, distributed through its Publisac distribution network.