Thousands of people, including Prime Minister Stephen Harper, were in the Quebec town of Lac-Mégantic over the weekend to remember the 47 victims who lost their lives in a devastating tanker train derailment. 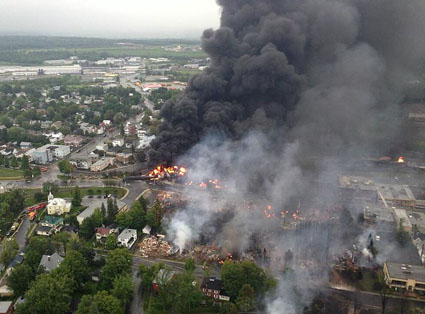 TC Transcontinental and Resolute Forest Products, both Montreal-based companies aligned to the printing industry, have pledged over $50,000 of support in the continuing efforts to help the people of Lac-Mégantic, a small community of around 6,000 in Quebec’s Eastern Townships.

On July 6, just after lunch hour, an unattended 73-car freight train carrying millions of litres of crude oil began to roll downhill and slammed into Lac-Mégantic’s downtown core and set off a series of explosions and fireballs. More than 30 buildings in the town’s centre, roughly half of the downtown area, were destroyed. It is being recorded as the fourth deadliest rail accident in Canadian history, and the deadliest since the St-Hilaire train disaster in 1864.

To assist the efforts of the Canadian Red Cross in gathering donations to help those affected in Lac-Mégantic, TC Transcontinental arranged to make promotional space available in its many community papers, as well as Les Affaires and the Métro Montréal newspaper. In addition, the team of contributors to the show Ça commence bien!, produced by TC Media Production and aired on V, continue to make on-air appeals for donations.

“We know that this gesture of support by TC Transcontinental will help the Canadian Red Cross continue its work in the community knowing that its message is still getting out to the public, that is, that the needs of the people of Lac-Mégantic are many and urgent and that donations are necessary,” stated Isabelle Marcoux, Chair of TC Transcontinental’s Board. “Our TC Media newspapers are a vital source of information in many communities and we are proud to be contributing to the network of support now being built across the country.”

“Despite the days that have passed since this terrible tragedy, we still have difficulty finding the right words and gestures to express our compassion and support for the people of Lac-Mégantic,” stated Richard Garneau, CEO of Resolute. “As a large company in Quebec, we believe we have an important role to play in assisting the community during this difficult time. The people of Lac-Mégantic are in our thoughts.”