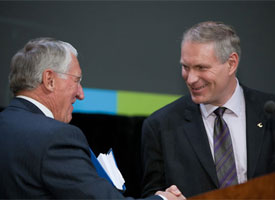 Transcontinental held its Annual Meeting of Shareholders last week which included the company’s 2010 financial results. Speeches were given by Rémi Marcoux, Transcontinental’s Chairman of the Board, CEO François Olivier, and CFO Benoit Huard.

“Today, I am proud, on behalf of our some 10,500 employees, to tell you that fiscal 2010 was the best operating performance in our history,” said Olivier. “Once again, we responded appropriately to change and to the transformations in the economy and in our industry.”

“Our adjusted operating income before amortization rose from $339 million to $382 million, an increase of nearly 13 percent,” added Marcoux. “All of our financial indicators improved, making us one of the leaders in the print, media and interactive sectors in North America.”

The Printing Sector revenues decreased $88.1 million, down 5.8 percent from 2009’s total of $1.53 billion. Transcontinental attributes the lower revenues from the sale of the Retail Group printing plant in Ohio in 2009. Printing still represented two thirds of the company’s total revenues, with its Media sector contributing 28 percent and Interactive the final six percent. The Printing sector also has the most employees, representing 5,800 of the company’s total 10,500 employees. Total revenues for the company in 2010 was $2.09 billion, a decrease of four percent when compared to 2009.

The company also published its second annual Sustainability Report, which included accomplishments such as saving 14.7 percent on its plants energy use, donations and sponsorships of $5.8 million in communities.

Transcontinental also announced an expansion to its agreement with Canadian Tire in which Transcontinental will print all of the company’s flyers and marketing collateral, as well as provide interactive marketing for the retail chain over four years, starting in January 2012.

“We are extremely proud of this new agreement, which is a perfect reflection of Transcontinental’s new multi-platform offering in print, Web-based media and interactive marketing. Canadian Tire is one of our most loyal clients, going right back to our very beginnings. We have developed a close relationship, one that will allow us to keep building programs that meet the specific marketing needs of Canadian Tire,” said Olivier.