Just weeks after purchasing the publishing assets of Groupe Le Canada Français, which included 11 weekly and monthly printed titles, as well as Web portals, Transcontinental Media made another regional move in the province to acquire the majority of assets from Avantage Consommateurs de l’Est du Québec inc. 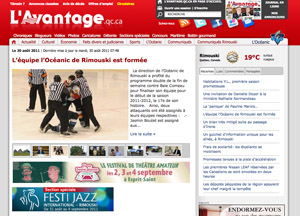 While the earlier purchase focused on publications and Web portals serving the Saint-Jean-sur-Richelieu and Granby areas of Quebec, the company’s newest acquisition includes three well-known publications for an area stretching from Saint-Simon to Gaspé.

The publishing assets acquired from Avantage Consommateurs include print and electronic publications of the weekly Rimouski community paper L’Avantage votre journal, reaching more than 43,000 households from Saint-Simon to Sainte-Florence in the Matapedia Valley; L’Avantage gaspésien, with more than 17,000 copies distributed from Baie-des-Sables to Rivière-Madeleine; and the monthly Le Régional, with a circulation of 91,000 copies in Eastern Quebec.

All of these Quebec communities are also served by the regional Web portal lavantage.qc.ca, which now joins Transcontinental Media’s digital network – comprised of over 1,000 Websites, reaching 11.3-million unique visitors per month in Canada.

Transcontinental also picked up what it describes as the significant door-to-door distribution network of Avantage Consommateurs de l’Est du Québec inc., which already had a partnership with Transcontinental to distribute Publisac to more than 91,000 households in the area.

“I have great confidence in handing over the reins to Transcontinental,” stated Gonzague Drapeau, President of Avantage Consommateurs. “Having worked with their staff in our printing and distribution partnerships, I know that we share the same values of quality and respect, which are fundamental to our publications. This marks a new stage in the life of L’Avantage, opening new doors and possibilities for both our advertisers and the communities we serve.”