Canada’s largest printing company reversed a $6.4-million loss in the first quarter of last year, with a profit of $26.2-million in the first-quarter of the current fiscal year, as Transcontinental Inc. nears the completion of its unique newspaper/flyer platform. 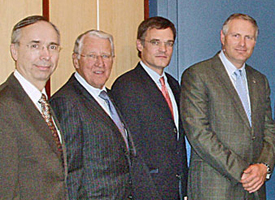 “Our first-quarter results show a marked increase in our profitability compared to the first quarter of 2009, and this is the third consecutive quarter in which it has improved,” stated François Olivier, President and CEO, in a press release. Olivier continued to state that the results speak to the company’s implementation of a cost-cutting plan over the past year, as well as the employee’s dedication to the rationalization measures.

In the first quarter ended January 31, 2010, Transcontinental recorded consolidated revenues of $559.3 million, compared to $625.4 million in the first quarter 2009, down 11 percent. The company points to an unfavourable exchange rate effect of $20.5 million, as the primary reason for the 11-percent decrease. Transcontinental also points to a negative $18.2-million effect because of the divestiture or closure of plants and publications, as well as a decline in paper prices, which had a negative impact of $10.4 million on its revenues.

Within its financial statement, Transcontinental expects positive numbers in its upcoming earnings reports, as it continues with the rationalization plan. The company, for example, will generate proceeds of more than US$100 million with the pending (second-quarter) completion of a deal to sell most of its U.S.-based direct-mail assets to IWCO Direct.

The company also stated that it expects to have its new hybrid newspaper and flyer-printing platform fully operational by late 2010. In July 2009, Transcontinental signed a deal to purchase four triple-wide KBA Commander CT presses – a total of 16 towers – to be installed at plants in Toronto, Calgary and Vancouver. KBA states that each press line has a maximum hourly output of 90,000 full-colour newspapers, inserts or magazines with up to 48 broadsheet or 96 tabloid pages.