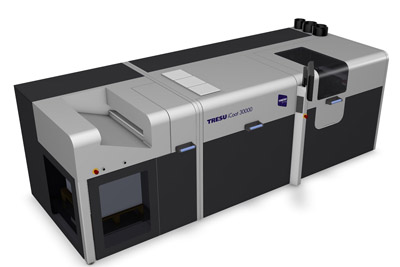 TRESU Group of Denmark reached an agreement with HP to supply an inline coating system for the new HP Indigo 30000 press, which is aimed at the folding-carton market. The TRESU iCoat 30000 coater is to use standard UV and water-based varnish, which can be applied in a single pass.

The solution was demonstrated inline with the HP Indigo 30000 for the first time during an HP Indigo customer event in Israel on June 18. The TRESU iCoat 30000 coater is equipped with quick changeover mechanisms for sleeves and plates designed to reduce setup time.

“Understanding how critical coating is in the folding carton market, we needed to work with a company that has vast experience in the specific needs of the industry,” said Alon Bar-Shany, Vice President and General Manager, Indigo Division, HP.

The technology will be publicly demonstrated in HP’s booth at Labelexpo Europe in September 2013. The first units of both the HP Indigo 30000 Digital Press and TRESU iCoat 30000 are expected to be installed at select launch customer sites by the end of 2013.