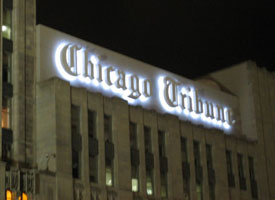 Tribune Co. yesterday was renamed Tribune Media Company after spinning off its newspaper publishing division, which becomes an independent company with eight dailies, including iconic media brands like The Los Angeles Times and Chicago Tribune.

Tribune Co., based in Chicago, emerged from a four-year bankruptcy-protection process in early 2013. Various reports from media analysts suggest this move by Tribune Co. aims to shield its television business from a decline in print advertising.

A new company called Tribune Publishing stated trading today on the New York Stock Exchange under the symbol TPUB, which now controls the dailies. It will be lead by publishing veteran Jack Griffin, who served as Meredith’s President of the National Media Group from 2004 to 2010, before taking the lead of Time Inc.

In addition to The Los Angeles Times and Chicago Tribune, Tribune Publishing controls major daily newspapers like The Hartford Courant, The Sun Sentinel in Fort Lauderdale, The Orlando Sentinel and The Baltimore Sun.