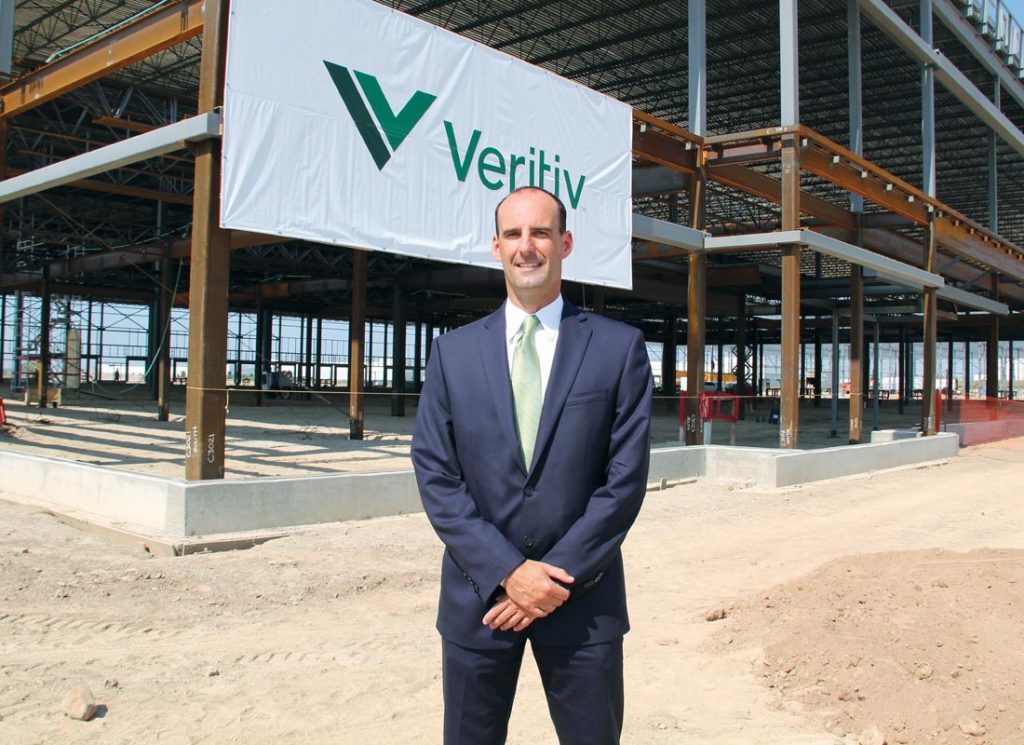 Veritiv's new home in Mississauga, ON.

In August, Veritiv Corp. held a groundbreaking ceremony in Mississauga to celebrate the ongoing construction of a 450,000-square-foot facility that will become the company’s new Canadian headquarters. Mary Laschinger, Chairman and CEO of Veritiv based in Atlanta, attended the event along with the city’s Mayor, Bonnie Crombie.

Located just off highway 401 at Hurontario, in the growing business area of Courtney Park, now home to some of Canada’s largest industrial facilities, the new Veritiv building is scheduled to be complete by around April 2017. It will amalgamate Veritiv’s three existing facilities in the Greater Toronto Area, bringing together some 350 employees. The project was led by Regional Vice President Jason Alderman, who became Veritiv’s leader in Canada when the company was formed in 2014 after a merger between xpedx and Unisource.

Alderman has been with Veritiv for 11 years after leading the company’s facilities supply business, which accounts for 55 percent of revenue generation in Canada, for a couple of years. He previously held various sales and production management roles, primarily in Canada’s Western region. Alderman sat down with PrintAction at the groundbreaking ceremony to discuss the Fortune 500 company’s growing influence in Canadian printing.

Why is this project described as an $70 million investment?
JA: The first year we are looking at about $8 or $9 million in some CapX to get this building up and going, and obviously the rent side of it to start. And then over the 15-year term, that we have taken out for this facility, it is $70 to $80 million investment overall.

What does this building say about Veritiv’s commitment to Canada?
JA: We are committed to growth is really what it means. We have an opportunity here to expand on our existing business which is already $106 million as it stands today. And we will have growth in all three core segments of our business: Commercial print, packaging and facilities. If we weren’t committed to Canada, we would  not be making this investment today.

How will the new building change Veritiv’s footprint in Canada?
JA: About 1/3 of our sales will be sold and distributed out of this location once we move in. When we move in we will still have about 20 percent room for growth overall and it also helps us provide some new services that we are thinking of getting into for all three segments of the business. It really is an opportunity to expand the bundle that we already provide to our existing and new customers.

What are some of these new services?
JA: On the packaging side, we are going to have a little more room to showcase some of the packaging equipment that we previously did not have an opportunity to do. It also gives us an opportunity to bring in a little more inventory to support some of the investments, to support an expansion into the wide-format space, which is a growth media on the print side of the business. We are a little condensed right now in the facility we are at.

Which core business will grow most?
JA: This year we expect growth in all three segments. I know a lot of people are surprised by the fact that we are expecting growth in print. We believe that we continue to take share in the marketplace over the next four or five years to get ourselves up into the lead position in Canada from a share perspective.

We were not a packaging company in Canada if you look back over the past 10 years. In the last two years, we have really accelerated the growth there and we really believe that is where our greatest opportunity for accelerated growth is. But that also relates back to the print business where there is becoming a blurred line between what was traditional commercial print and now those printers are looking to get into some form of packaging world.

What will the facility in the GTA mean for the rest of country?
JA: We are making some minor changes such as moving out of our existing Ottawa facility, which is a bit older, into a brand new one to improve operational efficiencies and workflow, which keeps costs under control.

Is this your first major project since taking on Veritiv’s lead for Canada?
JA: There will not be bigger real estate project than this in Canada in the foreseeable future. It has been very rewarding for all of us and me personally.