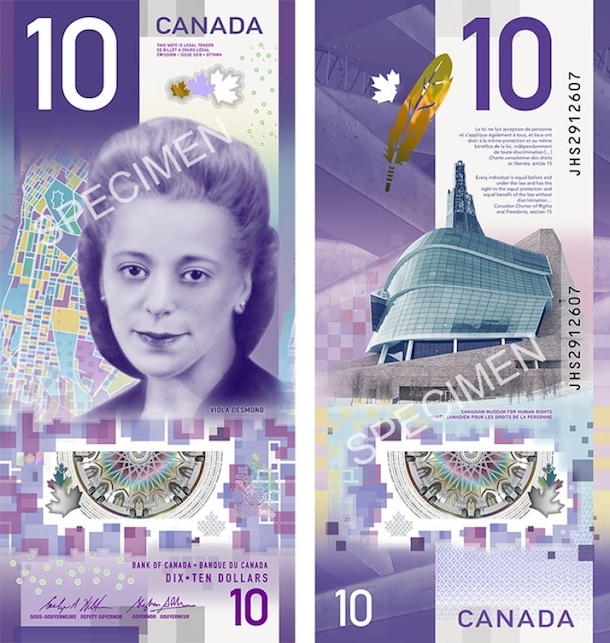 When the Bank of Canada announced the release of this note on November 19, 2018, they said they were going in “a new direction.” Polymer replaced paper on Canadian banknotes several years ago but this is the first vertical format note for it. The face of the note features the portrait of social justice icon Viola Desmond while the back depicts the Canadian Museum for Human Rights in Winnipeg, Man. Desmond fought for racial equality across Canada and is the first Canadian woman to appear on a bank note; other women have all been British royals.

Advertisement
Related: Canada introduces its first vertically oriented bank note Printed by the Canadian Bank Note Company in the same distinct purple colour as the previous horizontal format $10 polymer note, this note is just fractionally larger than neighbouring United States currency bills. Canada plans “to issue a new denomination every few years” and the Bank of Canada has confirmed the next four notes in this series will also use the vertical format.

No stranger to the IBNS annual bank note contest, Canada won the inaugural IBNS Bank Note of the Year Award in 2004, placed second three years in a row (2011, 2012 and 2013) and finished in third place just last year.