Since the 2012 Drupa, select students from the School of Graphic Communications Management (GCM), and a few faculty members travelled to Germany to attend the Drupa and Interpack trade shows in Düsseldorf, Germany. In 2019, the School selected a group of eight students to travel to Germany in 2020 to attend the next Drupa. Well, we all know how travel plans derailed in 2020.

As you might know, Drupa was first postponed, and Messe Düsseldorf was hoping to hold the trade show based on a concept they had developed for another event that took place on the same fairgrounds in the fall of 2020. These plans were also derailed due to the ongoing pandemic and resulting travel restrictions.

Drupa happens only every four years, and the exhibiting companies usually use it to release new products and significant upgrades to existing products. The Drupa organizers decided to host a virtual version of the event, called virtual.drupa to not lose this momentum. It took place from April 20 to April 23, 2021. On the virtual.drupa website, companies were able to create their exhibitor profile and showcase their products.

Initially, the School of Graphic Communications Management was supposed to be part of the World Print Campus booth at Drupa, organized by our German partner university, the Hochschule der Medien (HdM) or Stuttgart Media University in Stuttgart, Germany. Since this was not possible, GCM set up a virtual booth.

The School posted some information about the curriculum, recent events like the GCM colloquium, and two showcases of student work from the past fall and winter semesters. The partner schools for the World Print Campus, such as Clemson University, also set up virtual booths.

Like with the in-person event, it is impossible to see everything or watch every presentation under these areas of interest. Also, if you wanted to see any talks or presentations live, you had to consider the six-hour time difference to Germany. For a few sessions, I got up a bit earlier to listen to the presentations at 6:00 a.m. Don’t worry if you didn’t have time to attend virtual.drupa. A video library of all presentations and conference streams is available.

Virtual.drupa used the Zoom platform. Therefore, recording any presentations or talks was easy. Another benefit of virtual.drupa was that you could register for free and access all these presentations and the conference streams.

I had a bit of a surreal experience during virtual.drupa. On April 20, 2021, I was enjoying presentations. One of the hosts, Chris Brow, was either announcing presentations by companies or was in one of the conference streams guiding the participants from one topic to the next. The next day, on April 21, I was hosting an event from the International Circle of Educational Institutes for Graphic Media and Management (IC) and the International Association of Research Institutes for the Graphic Arts Industry (IARIGAI), and I interacted directly with Chris Brow shortly before the event started. It was like watching a movie the day before, and the next day you are in the film yourself.

The IC and IARIGAI event was about bridging education, research and industry in graphic communication, print and media. For this event, IC and IARIGAI were able to secure speakers from Esko, HP, Intergraf and the Graphic Communications Education Association. Frank Romano, professor emeritus from the Rochester Institute of Technology (RIT) and print guru, gave the main address at this conference event. The speakers talked about the challenges the industry is facing regarding hiring young talent, changes in consumer tastes, and how the industry is supporting educational institutes around the world, so students get educated for this ever-evolving industry since the pace of change is increasing.

My colleagues from IC and IARIGAI told me afterward the event was well-received by the audience.  Having hosted many Zoom sessions myself as a professor, I have to say the virtual.drupa team managed all the sessions professionally and without any interruptions or the typical “You are on mute!”.

The virtual Drupa team has made a nice infographic about the event. 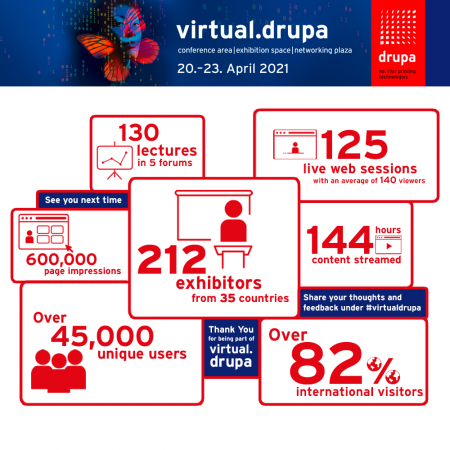 The infographic shows clearly how active the event was. Of course, the number of visitors is less than the actual Drupa event. The 2016 Drupa had 260,165 visitors from 183 countries and 1,828 exhibitors. One exciting aspect is that the 125 live web sessions had an average of 140 viewers. Having 140 viewers is quite a good number of attendees for web sessions. Nevertheless, virtual.drupa kept the momentum going.

One thing that was notably absent from virtual.drupa event was the launch of new products. According to Ralf Schlozer’s article published on WhatTheyThink.com, there were four exciting product launches. These launches were:

• EFI MCORR 1300 – a smaller version of the Nozomi;
• Fujifilm Jet Press 750S High Speed with an hourly sheet throughput of 5,400 sheets/h;
• Olbrich presented, together with Ricoh, a web-fed inkjet printer for vinyl wallcoverings and flooring; and
• Comexi launched the Digiflex inline inkjet bar for flexo presses, laminators and slitters with a print speed of up to 250 m/min or 820 ft/min. The Digiflex inline inkjet bar used UV inkjet inks. They also launched their D4 inkjet press that uses water-based inks and can be configured with four to eight colours. Depending on the selected print resolution, the press prints at 246 ft/min or 492 ft/min. The Digiflex bar should be available in October 2021, and the D4 press will be available sometime in 2022.

Even though virtual.drupa was just a shadow of the actual Drupa, it was important this event took place in order to remind everyone innovation is taking place in this industry all the time. Also, digital printing will make more and more inroads into jobs that were printed with conventional printing processes, and the industry needs to become more attractive to the young people who are about the enter the workforce. Everything is in flux, and the virtual.drupa event showed how future trade show events could be a combination of traditional and virtual components.

Martin Habekost is associate chair of Ryerson University’s Graphic Communications Management program and can be reached at mhabekos@ryerson.ca.