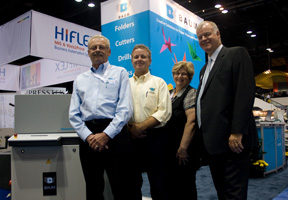 In April 2009, Baumfolder began building a production line to assemble the BaumPrint 18 press as Hamada announced it would stop selling printing presses into the North American market. Most U.S.-based Baumfolder dealers, which previously sold Hamada presses, will now focus their attention on the BaumPrint 18. This small-format press is rated to run at 10,000 sheets per hour with a printing format of 17.83 x 12.99 inches. Sheet size can range from a minimum of 3.94 x 3.94 inches to a maximum of 18.11 x 13.39 inches.

Wades Bindery Repair was established in 1986 by industry veterans Wade and Mary Sears. The company primarily focuses on the sale and service of post-press technology, while Wade Sears has over 30 years of experience installing pressroom technology into small- to mid-sized printing and finishing companies.

Baumfolder Corp., now owned by Heidelberg, traces is roots back to a 1935 distribution agreement with Liberty Folder Company, when dealer Russell Baum began moving these Liberty branded machines across the eastern United States. Baum took over the folding company in 1950.