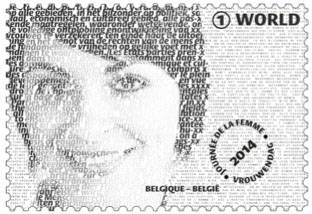 Guinness World Records sends an adjudicator to evaluate a stamp, designed for bpost Belgium to mark International Women’s Day, containing the image of a face formed with no less than 606 words.

“We consider it a diversity of utmost importance,” stated Pierre Leempoel, Manager Stamps Production, bpost Belgium, when asked why the country’s postal organization made a new stamp for the International Women’s Day. “For the design we called in the designer Ann Bessemans. She used a very special technique: a combination of gridded letters [for the women’s face) and a digital microtext [for the background]. Right away a scoop in stamp land.”

The stamp shows 606 words taken from the The Convention on the Elimination of all forms of discrimination against women. The adjudicator from Guinness World Records counted the number of valid words. “He did so with an iron hand: incomplete words and words that were too short were dropped,” explained Leempoel. “But we lay hold on the world record of ‘stamp having the most readable words.’ We actually do not yet know if we will figure in the famous book: only a happy few survive the selection.”

The bpost stamp was printed on a 4-colour Manrolna 704 3B P 2/2 press, which was installed in 2000 and now accounts for 15 percent of the organization’s production. The Women’s Day stamp with 606 words was printed as 108,000 sheets with five stamps each.