Xerox Corp. becomes a US$22-billion technology giant after finalizing the US$6.4 billion purchase of Affiliated Computer Services, self-described as the largest diversified business process outsourcing (BPO) firm in the world. 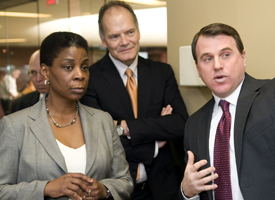 With the deal completed yesterday, Xerox now cliams itself as a US$22-billion technology and services company for business process and document management – a US$500-billion market, according to the company. Xerox ranked 147th on last year’s Fortune 500 list, with annual revenues of US$17.6, produced by Fortune magazine.

“For the past 50 years, Xerox has fortified its leadership in document management, creating new markets through our renowned innovation,” stated Xerox CEO Ursula Burns, in a press release, while also referring to the company as the new Xerox – “With ACS, we take another step forward.”

ACS will initially be branded ACS, A Xerox Company.  It will continue to be led by CEO Lynn Blodgett, who has been elected by the Xerox Board of Directors as an executive VP for the parent company – reporting directly to Burns.

“The breadth of ACS’ offerings – from HR benefits management and IT support to automated toll collection and electronic health records – is a significant competitive advantage and one we will continue to leverage through investments, innovation and global expansion,” stated Burns.