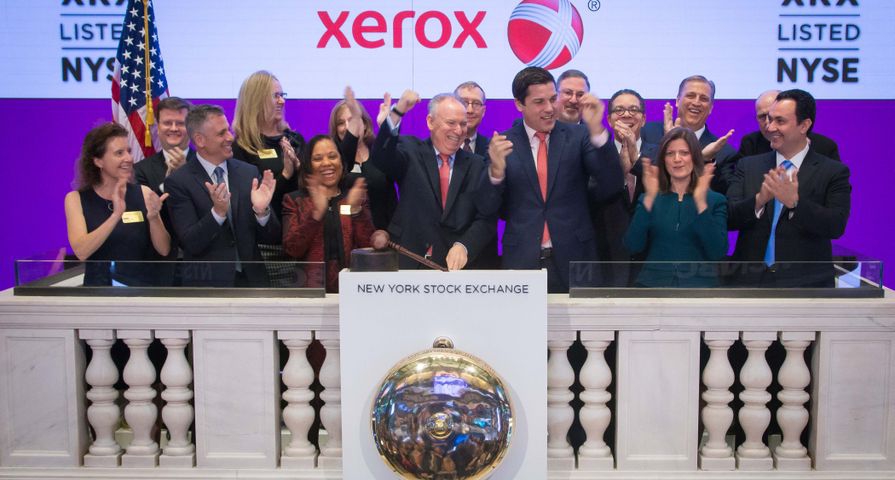 Members of Xerox’ executive team this morning rang the opening bell at the New York Stock Exchange to celebrate the company’s successful completion of separating into two publically traded companies.

The separation plan was first announced in early 2016 during the Connecticut company’s year-end public financial presentations, where Xerox leaders explained it would create a Document Technology company, retaining the Xerox Corporation name, and a Business Process Outsourcing company eventually unveiled as Conduent by mid-2016.

Ashok Vemuri, former President and CEO of IGATE Corporation, was appointed as CEO of Conduent and long-time printing-industry executive Jeff Jacobson was named as CEO of the new Xerox entity.

“Today is an historic day for Xerox,” said Jacobson on January 3, 2017, when the completed separation was announced publically. “The successful completion of the separation sharpens our market focus and commitment to our customers. I am confident the transformational actions we are implementing position Xerox for long-term success and unlocks shareholder value.”

Under the terms of the separation, on the distribution date of Dec. 31, 2016, Xerox shareholders received one share of Conduent common stock for every five shares of Xerox common stock they held. In connection with the spin-off, Xerox received a cash transfer from Conduent of US$1.8 billion, which it intends to use, along with cash on hand, to retire approximately US$2 billion in debt.

In 2016, Xerox noted Conduent will have the second-largest market share in the business process outsourcing industry, with services that touch two-thirds of all insured patients in the U.S. and more than half of all mobile phone subscribers in the U.S.