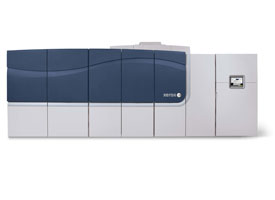 Xerox, known for its electrophotographic (toner) production equipment, has announced it has adapted its business-class solid ink technology for the production space. The new inkjet production will be released in early 2012.

Xerox claims its Production Inkjet System can produce nearly 2,200 pages or 500 feet per minute on a 20.5-inch web width and comes in either simplex or duplex configurations. The imaging technology is based off of Xerox’s solid ink technology, which is a granulated, resin-based ink. Xerox says the key benefit of its system is the elimination of water leads the images to be more vibrant images, with no ink soaking through. This means the machine can print on lightweight untreated stock. The printed pages also feature high de-inkability for better recycling.

The machine was demonstrated at Hunkeler Innovationdays 2011, being held in Lucerne, Switzerland. The event sees almost 5,000 industry professionals gathering to see and demonstrate the latest in print-on-demand technologies, from prepress to finishing. Pricing of the Production Inkjet System was not released, but the company said more information will be made available in the Fall.