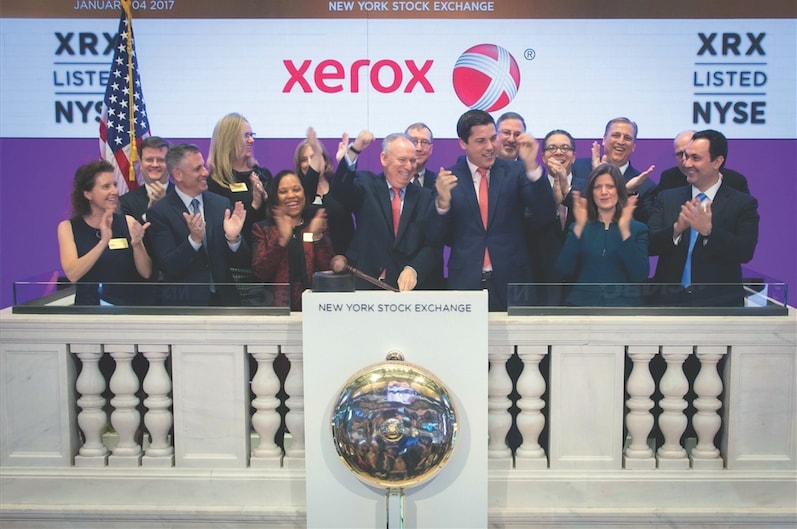 CEO Jeff Jacobson (centre) is resigning as part of a new agreement between Xerox and shareholders Carl Icahn and Darwin Deason. Photo: Xerox

In a statement issued late Tuesday, Xerox announced it reached an agreement with shareholders Carl Icahn and Darwin Deason to resolve a pending proxy contest and ongoing litigation related to the company’s proposed combination with Fuji Xerox Co. Ltd., a subsidiary of Fujifilm, which would allow Fujifilm to take the controlling interest in Xerox.

Xerox will appoint six new members to the board, including Nicholas Graziano, Scott Letier, Jay Firestone, and Randolph Read. Keith Cozza, CEO of Icahn Enterprises L.P., is expected to be elected Chairman, while John Visentin will assume the role of Vice Chairman and Chief Executive Officer of Xerox.

Icahn issued the following statement about the agreement: “With new leadership in place, we believe Xerox will be much better positioned to take advantage of multiple potential value-enhancing opportunities, including restructuring its relationship with Fujifilm, our supposed ‘partner’ whose conduct over the last year is more unbelievable than what you see on fictional TV shows like House of Cards or Billions.”

“The future for Xerox is extremely bright. With John Visentin at the helm, receiving support and guidance from Carl Icahn and me, I am confident the alternatives for Xerox and its shareholders will be fully and expeditiously maximized. John is the right leader at the right time for Xerox,” said Deason.