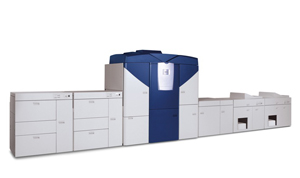 At PRINT 09, Xerox plans to highlight its Xerox iGen4 220, which, described as a perfecting press, is around the inline integration of two iGen4 110 engines. Scheduled for a mid-2010 commercial release, the machine has the ability to print 220 impressions per minute, while Xerox claims it can handle a monthly print volume of up to 7-million impressions. The iGen4 220, designed from the tandem architecture of the Nuvera 288, accepts a media format of up to 14.33 x 22.5 inches.

Much of the company’s booth will centre around the iGen4 system that was unveiled at drupa 2008. Xerox also plans to show its 700 model press.

Xerox will debut version 8.0 of its FreeFlow Process Manager software (US$20,000), which includes more than 20 pre-configured prepress functions like resizing and cropping. For example, the company claims, that a business card file can be imposed, rotated, cropped and sent to the press “with no human touch involved.”

Xerox will also have a press presence on several partnering booths like Fujifilm, Duplo and C.P. Bourg. On its booth, C.P. Bourg plans to integrate a BSF Sheet Feeder with a Xerox Nuvera 288 EA system. This inline setup will also include C.P Bourg’s BCM Bleed Crease Module and its BDF Document Finisher – stitch, fold, and trim.