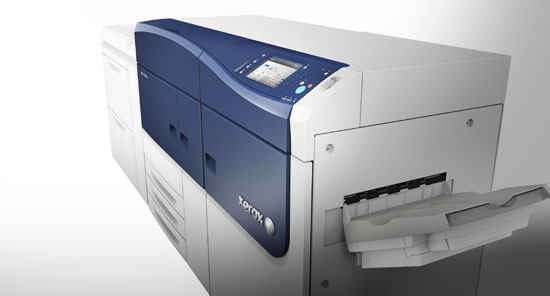 During a media briefing, Xerox executives describe the Versant 2100 production range as sitting in between the entry-level C75/J75 systems and higher-end Docucolor 800/1000 presses. The Versant 2100 has been designed to replace the DocuColor 8080 engine.

The Versant 2100’s imaging system uses a new compact belt fuser handling substrate weights from 52 to 300 GSM at 100 pages per minute (ppm), as well weights of above 300 to 350 GSM at 80 ppm. The press also includes an auto sheet-clearing feature to reduce paper jams. Xerox describes the substrate range of the press as being able to handle unique stocks like linen, polyester, vinyl magnet and specialties.

The press prints with what the company labels as new Ultra HD Resolution, in which reproductions are rendered at 1,200 x 1,200 dpi at up to 10 bits. Three controller options are available, including the Fiery-based Xerox EX and EX-P 2100 Print Servers, as well as the Xerox FreeFlow Print Server. Users can also leverage software like Xerox FreeFlow Core to automate prepress steps and XMPie StoreFlow for generating Web-to-print portals.

For registration, Versant 2100 uses what Xerox brands as Production Accurate Registration in addition to what the company refers to as Full Width Array technology. The press is rated for an average monthly print volume of between 75,000 to 250,000 pages, with a duty cycle of 660,000 impressions.