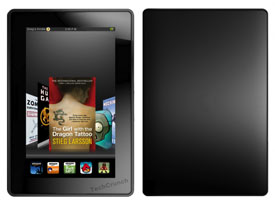 UPDATE SEPT. 28: Amazon has made the formal announcement of the Kindle Fire. It will be US$199 and start shipping on November 15. Amazon has also announced a new e-ink based Kindle model known as the Kindle Touch. Unlike its previous models, it will not have a physical keyboard, instead relying on a touch screen. 3G version is US$149, Wifi-only model is US$99. Further down the range, a non-touchscreen Kindle will be US$79 (which is subsidized by advertising, unsubsidized models are $30-$40 more). Canadian availability is unknown at this point.

Mega online retailer Amazon is set to announce its offering in the increasingly crowded tablet market space on Wednesday this week. While other companies have failed to dethrone Apple’s iPad, Amazon’s effort is seen as having the most potential to drain sales from the Cupertino-based computer giant.

Expected to be named the Kindle Fire, the device is built upon the open-source Android platform. Google, however, is not involved with the development, and the tablet is not expected to be able to access Google’s Android Market for applications.

Amazon released its own Appstore on March 22, aimed at Android phone users. It has received significant traction with daily free apps, and deep discounts. Today the store has over 3,800 applications.

Advertisement
Amazon launched its first-generation Kindle reader in November of 2007 and soon became the leader in eBook devices. Based on e-ink technology, the devices caused its eBook sales to surpass the company’s paperback sales at the end of 2010.
The new Kindle Fire is expected to use a more conventional colour screen and is a response to Barnes and Noble’s Nook Color device and also the iPad. Tech industry blog Techcrunch reports that it will be a a 7-inch device which shares many similarities with Research in Motion’s PlayBook.
Print this page