Scarborough-based Cameron Advertising Displays Ltd. has purchased an Agfa :M-Press Tiger, which is slated to become the first installation of this industrial inkjet-based press in North America. 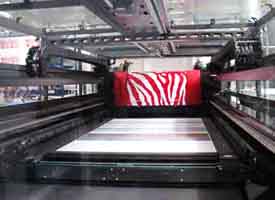 Cameron Advertising plans to complete the installation of its :M-Press Tiger by the end of the 2010 second quarter.   The company, with over 40 employees and approximately $10 million in annual revenues, has served the screen-printing needs of the Greater Toronto Area for more than 60 years.

“When we saw the :M-Press Tiger in action, that’s when we knew it was the right system for us,” stated Cameron’s VP, Reid Mason, in a press release. “With the :M-Press Tiger, we have the fastest system on the market… the system meets our aggressive quality and ROI requirements.”

According to Agfa, the :M-Press Tiger can print 17,000 square feet per hour, after upgrades introduced in November 2009, which is three times faster than its predecessor model. The upgrades include new print-head technology, auto-head positioning and tuning. The flatbed inkjet press is co-developed by Thieme and Agfa.