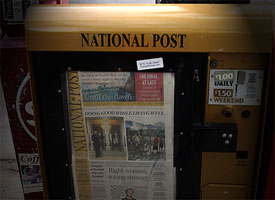 The sale of CanWest Global’s newspaper holdings is set to begin later this week, despite strong objections from CEO Leonard Asper, who feels these assets are undervalued in the current economy.

CanWest Global has been operating under bankruptcy protection since October 2009, with RBC Dominion Securities acting as the company’s financial advisor. RBC Dominion has found four potential suitors – Corus Entertainment, Shaw Communications, Fairfax Financial Holdings and Jim Pattison Group – to invest in the CanWest parent company, according to The Globe and Mail (see link below, along with two other related news links).

Each of these potential investors show varied interest in CanWest’s broad group of media assets. RBC has positioned the newspaper division to be sold separately. The Globe reported, that last week, CanWest CEO Leonard Asper wrote a letter in an attempt to stop creditors from putting CanWest’s 45 newspapers, as well as the National Post, up for sale.

While Asper feels the sale of the newspaper division is being rushed, and that a better price can be garnered when the economy improves, Grant Robertson of The Globe points out, “CanWest’s newspaper division, known as CanWest LP, has fallen seven months behind on its debt payments. The bank has warned Mr. Asper that he now has no say over whether the assets are sold to recoup $935-million the senior lenders are owed.”

CanWest’s newspaper division owes creditors more than $1.3-billion. The auction for this division, and its 45 newspapers, is scheduled to begin this Friday. It will not include the National Post.

Read The Globe and Mail articles: