CanWest Global Communications, operating under bankruptcy since October 2009, yesterday agreed to sell its newspapers assets for $1.1-billion to a group of bondholders led by National Post President and CEO, Paul Godfrey. 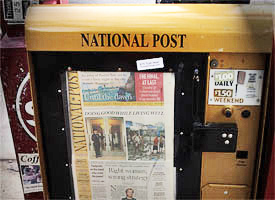 The court-appointed monitor of Canwest, FTI Consulting Canada, in consultation with the RBC Capital Markets, “determined that the bid by members of [Godfrey’s group] constituted a superior cash offer,” according to a company statement, yesterday. The purchase price of approximately $1.1 billion includes $950 million in cash funding. CLP owes senior secured lenders around $925 million.

Associated articles about the pending purchase: