With the May 2 departure of Gerry Heinz, Operations Manager, Pacific Bindery Services is now under the full ownership of Brad Clement, who has helped lead the finishing giant for the past 12 years. 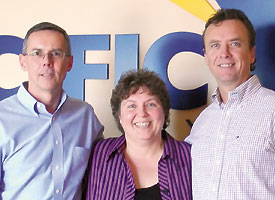 Heinz spent 32 years with Pacific Bindery, founded 39 years ago, which included a co-ownership position in the Vancouver-based company. With the departure of Heinz, Larry Worfolk assumes the role of Operations Manager at Pacific Bindery.

Worfolk most recently held the position of Customer Service Manager with Pacific, while also serving as Acting Operations Manager during several months of 2010. Worfolk also previously owned his own printing business.

Pacific Bindery now operates out of a 45,000-square-foot facility with 50 employees. The company is a perennial winner within the award competition hosted by the North American-based Binding Industries Association. Overall, Pacific Bindery has won 35 awards over the past eight years.