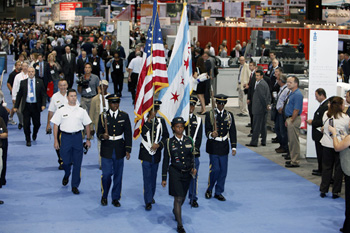 PrintAction breaks down the technology highlights from some of the larger vendors at Graph Expo, where offset made its presence felt once again and inkjet continued to advance.

A full Graph Expo report will appear in the next issue of PrintAction magazine. It will include further details about the following vendor highlights, listed alphabetically:

Canon highlights its new free software application for imagePRESS C1 + users, Clear Editor Viewer, which prints with clear toner to create the look of a varnish coat on a printed piece. It allows users to simulate spot varnish coatings. The latest additions to the company’s toner-based imagePRESS line include the new C7010VP, C6010VP and C6010 presses. The imagePRESS C7010VP and C6010VP presses are equipped to handle an expanded range of media types, from 16-lb bond to 120-lb cover weight, while delivering rated print speeds of up to 70 letter-sized pages per minute and 60 pages per minute, respectively, in color and black and white, regardless of paper weight.

Duplo highlights the debut of its DBMi system, a heavy-duty, high-volume collating and saddle-stitch booklet-maker. The DBMi, operated from a Windows-based controller, configures a DBM-S booklet-maker with up to six DSC-10/60i collators. The DSC-10/60i collator has an optional bin extension kit for feeding sheets up to 14 x 24 inches, as well as an optional intelligent feed function (IMBF). Producing up to 4,500 books per hour, DBM-S automatically transitions from CD size to letter landscape and can produce a book up to 14 x 12 inches. An optional DKT-200 2-knife trimmer and gutter cutter can be added for full-bleed inline books and 2-up applications, which increases output to 9,000 books per hour. Optional 3- or 4-stitcher head kits are also available.

EFI highlights the launch of its Fiery System 10 platform, which includes a new job-based Fiery Calibrator to provide calibration status and alerts. Fiery System 10 also ships with the new Image Enhance Visual Editor (IEVE). It allows users to edit each image in a job without going back to the native design file, as well as manually adjust brightness, contrast, highlights, shadows, colour balance, and sharpness, and make red-eye corrections. EFI also highlights its Rastek H652 UV hybrid printer, which handles rigid and flexible materials – such as Fome-Cor, PVC, corrugated plastics, plywood, aluminum, and glass – up 65 inches wide and 1.8 inches thick. Rastek H652 can reach a maximum speed of 455 square feet per hour and a 1,200-dpi resolution.

Fujifilm, the master global distributor for Inca, highlights the North American debut of the Onset S40, which handles a maximum substrate size of 3.14 x 1.6 metres and produces at 470 square metres per hour. The S40 produces various finishes, from satin to gloss, on both rigid and flexible materials with thicknesses up to 500 mm in manual mode or 10 mm in auto mode. The company also highlights the debut of its Acuity LED wide-format machine, as well as the new Acuity Advance HS (high-speed) wide-format UV flatbed printer, which hits a speed of 430 square feet per hour in production mode. The HS, jetting Sericol Uvijet inks (using Micro-V dispersion technology), reaches a new express-mode speed of more than 700 square feet per hour.

Goss highlights its new Sunday Vpak packaging presses, with variable-sleeve technology for packaging applications, which are available in web widths up to 75 inches. Goss describes Vpak as a new web-offset alternative to sheetfed, gravure and flexo presses for folding carton, film, and label applications. The company also highlights the continued expansion of finishing options that integrate with its presses, including equipment from Ferag, Akiyama, Purlux, and Yawa.

Heidelberg highlights the launch of Prinect Business Manager, its new Management Information System (MIS), which focuses on costing, equipment capacity, and material inventory, as well as a new version of Prinect Image Control and Prinect Web-to-Print tools. Along with two Speedmaster presses (SM 74 with Prinect Axis Control and SM 52 with Anicolor), Heidelberg also notes the booth presence of equipment based on recent distribution deals, including the Ricoh Pro C901 Graphic Arts Edition toner machine, which hits 90 pages per minute, and the EFI VUTEk GS3200, a UV inkjet machine for rigid and roll-to-roll printing.

HP highlights a speed increase to its 20.5-inch-wide T200 Inkjet Web Press, which can now run at 400 feet per minute (up from 200 feet per minute) in colour production. The company also highlights its flagship Indigo 7500 press, first launched in late 2010, which can print up to 120 A4 pages per minute in full colour or 240 pages per minute in either monochrome or two colours. The press, available with up to seven ink stations, is rated to produce up to 3.5 million colour pages or 6.5 million monochrome pages per month. In addition to its Indigo line, HP highlights the breadth of its imaging portfolio, which includes numerous products under the Designjet, Scitex, and Specialty Printing Systems brands. HP also highlights enhancements to its Exstream and SmartStream software portfolios.

Komori highlights the North American debut of its Lithrone G40 press, which prints up to 16,500 sheets per hour. The press features Komori’s KHS-AI self-learning technology to aid in make-readies, as well as a fully automatic plate-changing system that employs a bender-less clamp for easier plate discharge and feeding. The Lithrone G40 also features a new Suction Tape Feeder Board designed to handle a variety of paper weights. The new 40-inch press is also compatible with Komori’s H-UV curing system.

Konica Minolta highlights its bizhub PRESS C8000, which this August received IDEAlliance Digital Press Certification. The toner-based device, with a monthly duty cycle of 500,000 pages, can print up to 80 pages per minute. It runs Konica Mintolta’s third-generation Simitri HD + toner, reaches a maximum resolution of 1,200 dpi, and carries a paper capacity of 10,700 sheets with vacuum belt feeding. The company also highlights its smaller bizhub PRESS C7000, bizhub PRESS C70hc, and the monochrome-based bizhub PRO 1200 Series, as well as advances to its Printgroove production software.

Muller Martini highlights the debut of its Orbit 3-knife trimmer, designed for book applications, which allows for setting changes on the fly. The Orbit’s crossover capabilities allow users to handle a range of stock weights and sizes – from offset to toner and inkjet printing. It is powered by Muller’s Book Data Center, which allows for wrench-less make-ready and the separation of the driveline. The Orbit can trim up to 80 mm at 7,200 cycles per hour. Muller also highlights the launch of SigmaTrimmer, which uses a barcode scanner to read each book individually during infeed and then automatically adjust settings. SigmaTrimmer works at a speed of up to 1,000 cycles per hour.

Xeikon highlights its flagship Xeikon 3500 label press, which has a full rotary printing architecture with variable repeat length. The company describes the 3500 as the only toner-based label press that can handle web widths from 9.8 inches to 20.3 inches. The press, with true 1,200-dpi resolution and 1,200 x 3,600-dpi imaging addressability, can be integrated with inline finishing for UV-varnishing, super-glossing, slitting, and rewinding. The Xeikon 3500 has a monthly duty cycle of 3.8 million square feet.

Xerox highlights the North American debut of its CiPress 500 system, which the company describes as the world’s only high-speed waterless inkjet device. The twin-engine machine (listed at US$3.8 million) prints at 500 feet or 2,180 full-colour pages per minute. Xerox also highlights the launch of its new 770 toner press rated for a top speed of 70 pages per minute, as well as its upgraded 700 press model, called 700i. Both presses, available in October, can handle media weights of up to 300 gsm.