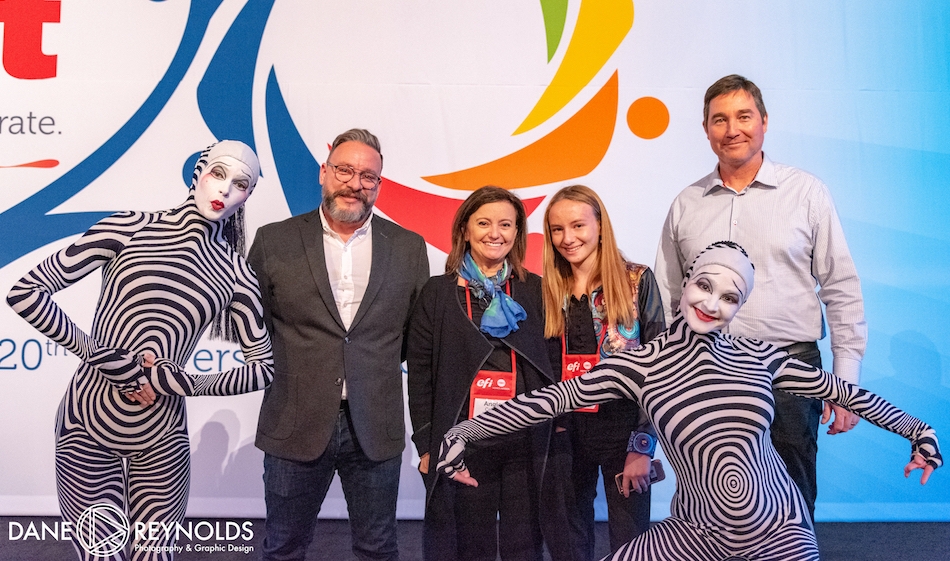 The year 2019 has just gotten underway, signalling it is time to go to Las Vegas and attend EFI Connect. This year was the 20th annual EFI Worldwide Users’ Conference, and the event kicked off with the keynote by newly announced CEO Bill Muir, succeeding Guy Gecht. He reminded the audience of the fact that EFI started 30 years ago when Google was just one year old. Change is happening rapidly and is not slowing down, he said — au contraire, it is likely to accelerate.

Muir stated that, “Technology changes exponentially” but “business changes logarithmically,” as he stressed that business does not always keep up with the changing pace of technology, but successful companies must continue to help their  customers do so. Describing it as EFI 4.0, Muir noted that EFI strives to be the combination of innovation and execution of these innovations, and that it is his responsibility to keep the innovation engine going.

During his keynote address, Muir said print sales are gradually increasing after years of decline, and that is mostly due to value-added sales. Although the number of commercial print businesses in the U.S. decreased by 25 percent, the revenue per business increased by 15 percent, he said.

The traditional ‘fireside chat’ took place between Muir and Joe Popolo, CEO of The Freeman Company. Headquartered in Dallas, Texas, The Freeman Company operates offices in eight countries and organizes live events like the Consumer Electronics Show (CES) and the Republican National Convention (RNC), among others. According to Popolo, the future of live events is strong, with today’s demographic wanting to go to live events and experience the interaction with that event. He gave a few words of advice and wisdom to the audience: “The more solutions you can provide to your customers, the better off you are,” “Be customer obsessed,” and “Expanding into new product lines is hard.” Focused on developing and delivering memorable brand experiences for its clients, the US$3-billion firm produces 10 million square feet of print a year with its 17 VUTEk wide-format fabric printing machines.

The following morning Marc Olin, CFO, and Gaby Matsliach, Senior VP and General Manager of Productivity Software, both of EFI, spoke about the product releases that debuted last year and the innovations in the pipeline to be introduced this upcoming year.

EFI launched machines for the wide-format market that uses UV-LED curing technology, such as the Pro 32r, a 3.2-metre roll-to-roll printer with a built-in Fiery digital front end (DFE), which debuted at SGIA 2018. Another system using UV-LED curing is the h5 for flatbed printing, which features a 7-picolitre droplet size and 1200 dpi resolution.

For the soft signage market, EFI introduced the VUTEk FabriVU 340i with 2400 dpi resolution. The dye-sublimation printer includes a built-in calender and heat press and allows users to direct print to fabric and sublimate inline for one-offs that are immediately ready for finishing and shipping.