Alon Bar-Shany, VP of Indigo, today drew a rare spontaneous applause from over 120 business journalists gathered in Tel Aviv, as he introduced a 29-inch-format digital press in the HP Indigo 10000. 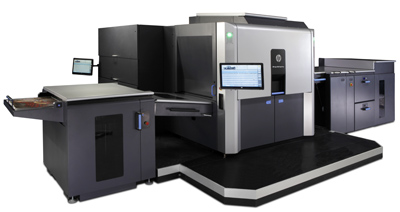 The B2-size Indigo 10000 press unveiling took place on the first day of HP’s pre-drupa briefing in Israel. For the first time in several years, a development in toner presses seemed to steal the spotlight from inkjet. While HP abhors the classification of its Indigo presses as toner machines, because they print with liquid inks as opposed to solid toners, the new Indigo 10000 represents a sea change in the toner (electrophotography) press space.

Since arriving in the industry in the 1990s, electrophotographic presses have been stuck in a sub-20-inch format size largely because of the challenges – potential R&D and manufacturing costs – of expanding the all-important electro-photostatic drum, which forms the imaging heart of toner machines. The new Indigo 10000 marks the first salvo at one of commercial printing’s standard litho formats, while also presenting itself as a sudden competitor to the emerging cut-sheet inkjet presses of 29-inch format size.

“We believe this is going to take us into the heart of the offset market,” Bar-Shany told the crowd of journalists, speaking about the Indigo 10000 arrival, adding, “It is everything you expect from an Indigo but in a larger format.”

While the Indigo 10000 has been running with a printer in the UK and another in Japan, the new press will find its way into worldwide beta sites by the time Germany’s drupa tradeshow arrives in May, with an anticipated commercial release of the machine in early 2013.

Scheduled for commercial availability in late 2013, the HP Indigo 20000 is a roll-to-roll press with a 30-inch media width and a 44-inch repeat length. With up to seven-colour printing, including white ink, the Indigo 20000 runs at 88.6 linear feet (27 linear metres) per minute in five-colour mode (full process colour plus white) and at 147.6 linear feet (45 linear metres) per minute when running in Enhanced Productivity Mode. An inline priming unit on the press is used for compatibility with most standard flexible packaging substrates from 10 to 250 microns thick.

The sheetfed HP Indigo 30000 press features a 29.5 x 20.9-inch (750 x 530-mm) format size with up to seven colour channels. Designed for the folding carton space, the press can handle substrates of up to 24 point or carton stocks of up to 600-microns thick. The press reaches a top speed of up to 3,450 sheets per hour in regular four-colour process printing, or 4,600 sheets per hour in Enhanced Productivity Mode.