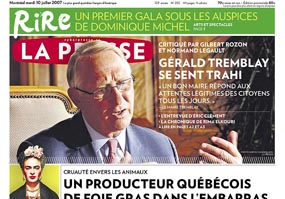 After threatening to completely shut down La Presse at the beginning of September 2009, Guy Crevier, president and publisher of the Montreal-based newspaper, announced management has entered into an agreement in principle with its four FTQ-affiliated unions (advertising, preparation, internal printing and boiler room). Meanwhile, negotiations are continuing with the four CSN unions (editorial staff, clerical staff, computing and distribution).

Crevier set a December 1, 2009, date to reach new labour agreements or there would be no choice but to shut down both the online and printed versions of La Presse, which is recognized as North America’s largest French-language broadsheet newspaper. In an email to employees, Crevier wrote: “Under its current business model, it has no chance for survival… As of Dec. 1, La Presse will no longer be able to pursue its activities without significant changes to its costs. If there’s no settlement by that date, the publication of La Presse will be suspended, on paper and on [the online edition] Cyberpresse. . .”

Based in Montreal, La Presse, which is printed through Transcontinental, serves a daily readership of 815,900. The newspaper is owned by Gesca, a subsidiary of Power Corporation of Canada – controlled by the Desmarais family.