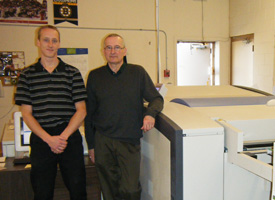 Premier Printing, based in Winnipeg, has installed a series of Fujifilm prepress technologies, including two computer-to-plate devices and Fujifilm’s XMF workflow with XMF Remote job submission and proofing.

“The addition of Fujifilm Javelin 8600S provided us with full platemaking automation to keep up with our large perfecting press, while the Fujifilm Javelin 8300E gave us flexibility for our smaller presses,” said Ted Gortemaker, VP of Operations at Premier Printing.