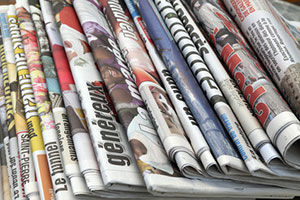 TC Transcontinental Inc. on September 3 announced it has shutdown 20 weekly newspapers following the $75 million acquisition of 74 weeklies in Quebec from Sun Media Corporation.

After the newspaper deal was first announced in December 2013, Canada’s Competition Bureau set a requirement for Transcontinental to put 33 of 154 newspapers in its full portfolio up for sale for a period of 60 days, including some that were part of the transaction with Sun Media. This process began on June 1, 2014, when the acquisition was finalized.

On September 3, Transcontinental reported that out of the 33 newspapers put up for sale, 14 have found buyers. Of that number, three will continue to be published as weekly newspapers and 11 will now be published online only.

As a result of finalizing the Sun Media deal, and meeting the requirements set out by Canada’s Competition Bureau, Transcontinental plans to stop publishing 20 of its titles. The company states, for the most part, these properties are to be integrated with other publications it holds in the same regions. The reorganization is expected to eliminate approximately 80 jobs.