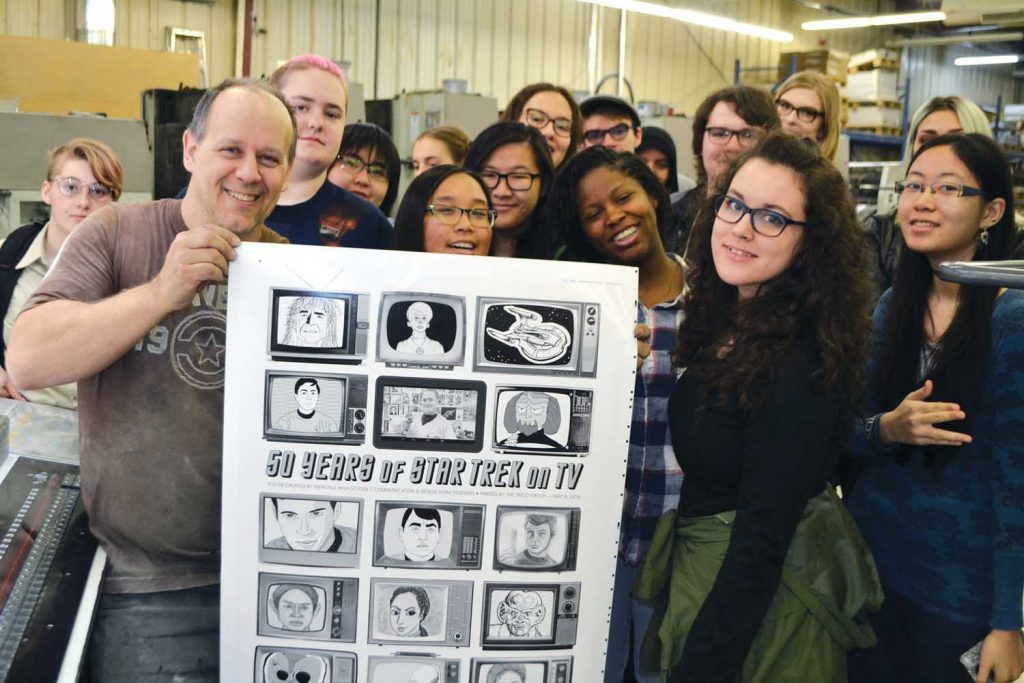 High school students in a specialized communications program work with a local Ottawa company to learn about the printing trade.

Young adults routinely participate in interactive online activities ranging from Facebook and Twitter to sophisticated multi-player games, chat rooms and blogs. It only makes sense, that for today’s students, an experiential approach to learning is a priority.

Merivale High School’s FOCUS program offers students in the Ottawa Carleton District School Board a unique opportunity to complete a concentrated one semester Communication and Design program that will prepare them for post secondary diploma and degree programs in graphic design, animation, photography and interactive multi media.

So although students will require a digital camera and some computer skills for their Graphic Design, Photography and Animation courses, they should also be prepared to arrive at visual solutions using a variety of pencils, ink pens and paint as well as with current vector drawing software. The program has a 25 seat Mac Lab and also boasts an intaglio press, which makes printmaking exercises possible, and a 10-station darkroom for developing and printing 35 mm film. Students primarily use Adobe software, but spend time with QuarkXPress and other applications they may encounter.

The FOCUS also involves a thorough immersion in printing technologies, and for the program’s offset lithography unit, the school enlisted the services of senior account and customer experience manager Jonathan Stokes of TRICO Evolution in Ottawa.

Poster objective
TRICO serves clients across Canada and the northern United States from its offices in Montreal, Ottawa, Kingston and Vancouver, accounting for 350,000 square feet. In September 2015, Delta Business Solutions and TRICO entered into an agreement to combine forces and operate as one company under the TRICO brand. With more than 240 employees, the company focuses on products and services across six lines of business: contract packaging, warehousing and logistics, display and signage, commercial printing, direct marketing, and marketing analytics and insight.

The FOCUS students’ objective at TRICO was to have the entire class contribute artwork for a poster marking Star Trek’s 50th year on television. The first series, now referred to as The Original Series, debuted in 1966 and followed the galactic adventures of James T. Kirk and crew of the starship Enterprise, an exploration vessel of a 23rd-century United Federation of Planets.

Students were given their choice of media, with the understanding that their final artwork would appear only in black and white. Some of the students chose to do artwork with traditional tools, others used Adobe Illustrator to make vector drawings. Because the sequels, movies, animated films and graphic novels are so easily accessible, and a much-hyped new series is in the works (planned for a January 2017 release), the students were all familiar with all the characters.

After the initial artwork was completed, all images were scanned at the proper resolution and then imported into a QuarkXPress document where the appropriate typographic notes were added. The finished poster was exported to PDF and FTPed to Stokes at TRICO.

When the class arrived at TRICO to see offset lithography in action, students were first shown how a printing job is scheduled and how files are processed when they come to the plant, reinforcing the time-sensitive nature of the business.

Stokes brought the FOCUS program students to the plate-processing station and there a skilled technician burned an aluminum plate of the Star Trek poster job and gave it to us for display at our school art show.

In the pressroom
The class next entered the printing area, where one of the TRICO pressmen had our poster printing plate mounted on the large litho press ready to go. The students were able to observe all the fine tuning done before a job enters production.

The class, whose printing experiences for the most part only included photocopiers, laser and inkjet printers were surprised at the speed and fidelity of offset lithography. They were also impressed by how efficiently large amounts of paper could be cut and trimmed with such accuracy. Our day at TRICO evolution finished on a high note in the board room, with Stokes showing impressive samples of critically acclaimed work done for corporate clients. Each student left with a few copies of their Star Trek poster and a greater appreciation and respect for the printing trade.