The unique power of postcards 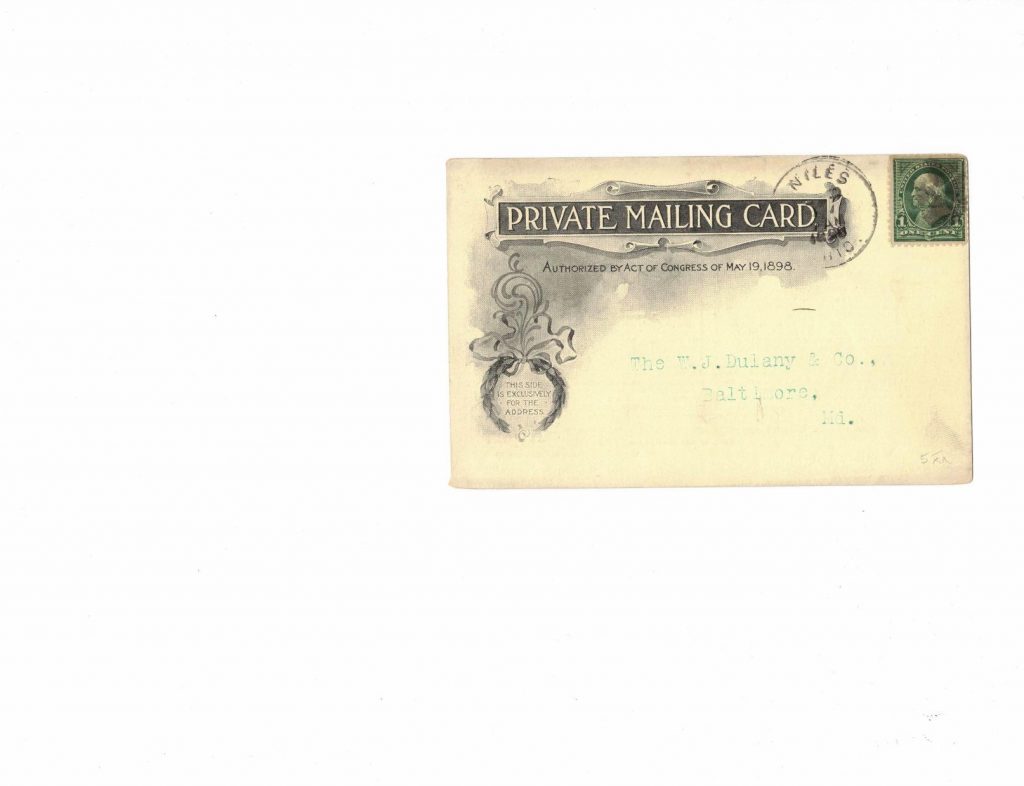 A guy, diving headfirst, into a small pond or lake—this was the image on a 1975-postcard included in Pink Floyd’s iconic vinyl album titled Wish You Were Here. I thought it was an innocuous addition, but did hope to mail it someday.

The back of the postcard read, “Wish you were here.” Vinyl albums have risen from obsolescence to capture a small bespoke segment of the music industry. If any Winkler & Dü nnebier record jacket machines have not been turned into car doors or gas pipes, they are just about the hottest commodity on the market. Although the choices were bleak in 1975, the vinyl record with emblazed graphics—and possibly a souvenir card—has managed to become relevant, especially for die-hard fans.

The postcard’s journey dates back to 1840’s England when an Englishman mailed himself a simple, hand-drawn card as a joke, apparently.

In 1861, John Charlton of Philadelphia patented a “private postal card,” and a trickle of cards started to appear in household mailboxes. Soon after, in 1865, Heinrich von Stephan, a Prussian established the “open post-sheet” in Germany. Postal rates (for envelopes) were expensive and Stephan surmised that a thin piece of card would reduce the costs and encourage Germans to stay in touch with family and friends. Although Stephan was a director of the Royal Prussian Post, the government was cold to the idea. However, the populace loved it and pushed through legislation allowing single cards at a reduced rate. 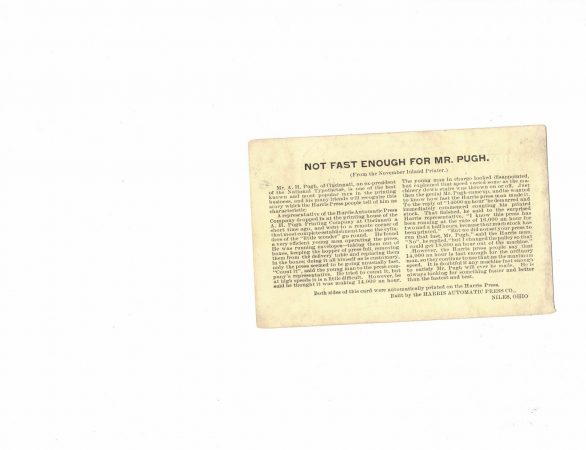 The back of a 1898-dated private mail card from Harris Printing Press Co.

“Shine on You Crazy Diamond” – Printers, that’s you

In 1870, the first mass-produced cards were being printed, many with lithographed images designed to catch the eye. The Austrians beat the Germans by a few weeks, but Stephan and the Germans are credited with the win. Also, in December 1870, the postcard was introduced in London, England, in time for the Christmas season. There were said to be riots on the streets, as Britishers descended on post offices to purchase the new cards. Nearly a million postcards were sold in England during the first week of launch itself.

Then British Prime Minister William Gladstone was so taken by the postcard rage that he announced he would quit and begin writing an epic book about the postcard. Common sense must have gotten the better of Gladstone, and he never gave up his job. Besides fervently supporting the postcard, Gladstone is also remembered for this memorable quote, which is valid today too: “We look forward to the time when the power of love will replace the love of power. Then will our world know the blessings of peace.”

The New York Times reported that in May 1873, the first American illustrated postcard was sent by S.S. Bumstead of Springfield, Mass., to fellow town resident M.M. Burt.

Originally penny postcards were only supplied through the post office. They were plain looking, and included a government stamp. The first U.S. printed stamp was the head of the proposed Statue of Liberty. France would donate the statue, but Americans had to pay for the pedestal and Bedloe’s Island where the statue would be situated. A major fund-raising drive was organized for the same, but Americans proved cool to the idea of shelling out cash for what seemed a superfluous idea then. The Statue of Liberty stamp changed all that. Americans across the country instantly became aware of the iconic face of liberty, and money started pouring in for the project almost overnight. 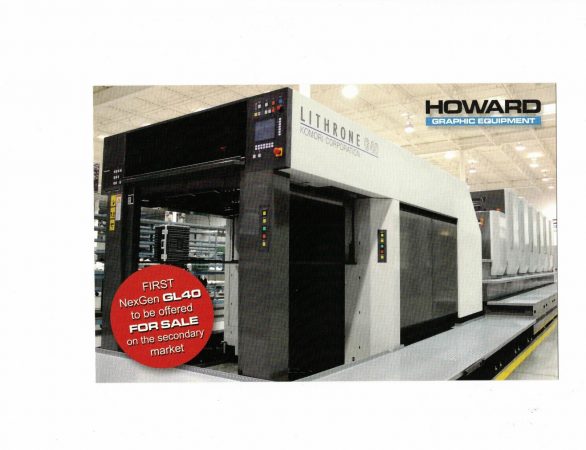 A 2014-front/back card that Howard Graphic Equipment used quite often.

Some people believe the postcard also helped launch the American coffee break. Most businesses kept a kettle of boiling water going most of the day. The steam dampened the foul-tasting glue used to seal envelopes. With hot water seemingly in limitless supply, employees started making cups of coffee and tea. Since penny postcards were half the postage and didn’t require envelopes, the boiling water started to disappear. So, some employees began stepping out to buy the hot beverage, and thus the coffee break was born.

Picture postcards appeared in force by 1880. The Germans, who were quite advanced in the use of stone lithography, became a major supplier of postcards (and greeting cards) for the next 35 years. It wasn’t until the First World War that nations started to invest in printing. The majority of cards then were issued by various governments and included a stamp. In the United States, Congress reduced private cards from two to one cent in 1898, which unleashed the modern age of postcards. With low mailing costs and increased travels, millions of cards were mailed, and an equal number were probably purchased for family albums.

The zenith of first-class postcards in the United States was 1990 when 3,307,076,000 were mailed. That’s a lot of print! In the same year, bulk advertising cards, known as pre-sorted postcards, amounted to an additional 1.5 billion. As is the case in the printing world, the use of traditional postcards has declined over the years. In 2020, only 4.8 million were mailed.

However, advertorial cards (pre-sorted postcards) continue to grow. Although facing some headwinds, these bulk cards amounted to two billion mailings in 2020 alone. That’s a lot of mailouts in a relatively young segment, which was first tracked by USPS in 1977.

Bulk mailing is the darling of a vibrant direct-mail industry that demonstrates the power of a simple piece of 10-point cardboard in getting and retaining business for their customers. Stats by Canada Post further emphasize the power of the postcard. Canada Post claims 30 per cent of consumers pay more attention to direct mail, and this includes the cards we receive from realtors and lawn-care businesses. With the number of letters and paper bills falling by 55 per cent since 2006, direct mail and cards have rushed to fill the void.

Canada Post recently announced they will print 13.5-million postcards that will include free postage. These cards will be sent to households across Canada in the hopes that residents who are tired of COVID-19 will use them to send a note to a friend or loved one. This is a major expense and sentiments are mixed, but it shows the power of postcards to connect people, even in this day of instant messaging and social media.

Recently, we discovered a French postcard mailed by my grandfather when he was stationed in France during World War One. The image is of a square in the town of Douai (France) with the Estaminet De La Petite restaurant in the background. Amazingly, that restaurant is still there and the square looks exactly as it did over 100 years ago. This card is not a piece of ephemera, but a lasting link to our family’s past. 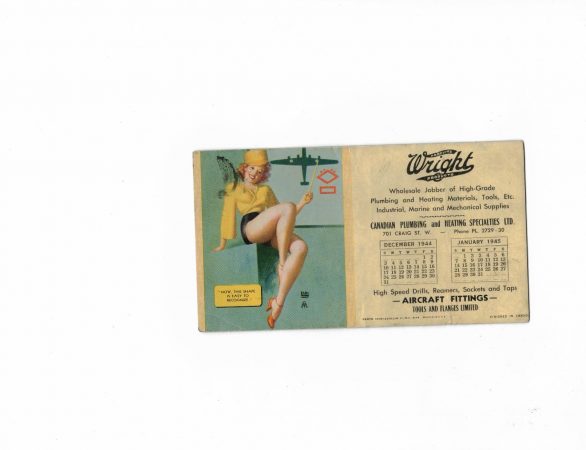 Welcome to the machine

So, is this article just about the history of the postcard? No. It’s much more than that. If anything, the postcard highlights the unique place print has in our everyday lives. While many printers surviving in the world of commercial work cast envious glances at those that are or have moved into packaging, the power of print, whether a direct-mail flyer or postcard, cannot be surmounted by the Internet and social media. If you need a plumber, a postcard probably won’t help if it arrives at the wrong time; you’ll have to Google a name for sure. However, when it comes to things you never thought about until a card arrives in the mail; well, that’s when the magic happens.

Mailchimp, the e-mail marketing service company, has introduced actual printed postcards for their clients. They refer to printed cards as “e-mail for mailboxes.” The templates allow their clients to use the postal service and take advantage of the power of direct mails. There are plenty of examples where a simple postcard can reach a higher percentage of buyers than the endless ads in social media. Yes, it’s more expensive to produce and mail a postcard, but you must be unique to stand out today’s market. Printed cards have started in to grow again and perhaps it’s because we, as an industry, tired of the doom and gloom, are now starting to realize print has something to offer that no other medium can touch: the ability to draw attention to some service or product we didn’t know we wanted by delivering the message through an exclusive portal: the mailbox.

Still, I’m disappointed in our printing equipment manufacturers for not taking advantage of the postcard more often. On a late Friday afternoon when the boss is usually found sequestered in the office reviewing the week’s activities, he or she spots a mailed card promoting a shiny new press or special offer. Recalling how one of their machines requires major repairs this decision-maker visits a website, and maybe, just maybe, leaves a message for someone to contact them. After a busy week, there was no thought of replacing their machine, but a chance encounter spurred an inquiry that just may turn into a sale. This is just another example of the power of printed postcards.

Nick Howard, a partner in Howard Graphic Equipment and Howard Iron Works, is a printing historian, consultant and certified appraiser of capital equipment. He can be reached at  nick@howardgraphicequipment.com.

This article originally appeared in the April 2021 issue of PrintAction.