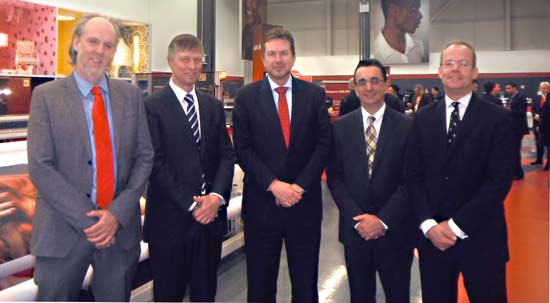 Agfa Canada in early March hosted dozens of printers and journalists from across North America at its demonstration centre in Mississauga, which is also the manufacturing site for the parent company’s high-end large-format inkjet systems.

Agfa Graphics refers to its revamped demonstration facility, housed within the 160,000-square-foot-plant that Agfa took over after purchasing Gandinnovations in 2009, as its new Canadian competence centre. The facility will play host to existing and potential Agfa clients from around the globe as they delve deeper into large-format inkjet technologies.

The two-day event, held March 4 and 5 under Agfa’s banner as a Red Carpet Event, featured the company’s recently launched Jeti Titan S and HS systems, which are built in Mississauga – one of the Belgian company’s three primary facilities for manufacturing inkjet systems. Agfa also builds its entry-level machines in South Korea and mid-range machines in Belgium.

The ink system on both the Jeti Titan HS and Jeti Titan S, which are driven by by Asanti workflow software and Anuvia UV-curable inks, is set at six colours plus white (CMYKLcLmWW). White printing is supported by different modes, including: overprint, under-print, spot, under-spot, fill and over-spot for rigids and pre-white for roll media.

The Red Carpet Event was kicked off by Dominiek Arnout, VP of Inkjet for Agfa Graphics, who is from Belgium but currently oversees operations for the facility in Mississauga. He spoke of Agfa’s growing position in large-format production, outlining the company’s strategy to be a top-three player in the market segment. Members of Arnout’s inkjet team then presented a series of technological presentations on topics like the new Titan S and HS, development of UV inks, Asanti software and opportunities in the large-format inkjet market.

Attendees were then taken on a tour of both Agfa’s new Canadian competence centre to see the new :Jeti machines in action, along with Asanti software and Titan HS M3200, Titan X and M2540 machines. Attendees were also toured through the Mississauga manufacturing plant, which sits just on the other side of the competence centre’s door, where Agfa also continues to perform R&D activities for its global inkjet business.

Agfa Graphics plans to host similar Red Carpet Events at its headquarters in Mortsel, Belgium, and across the world to provide information about its newest software developments, CTP solutions and wide-format inkjet systems.