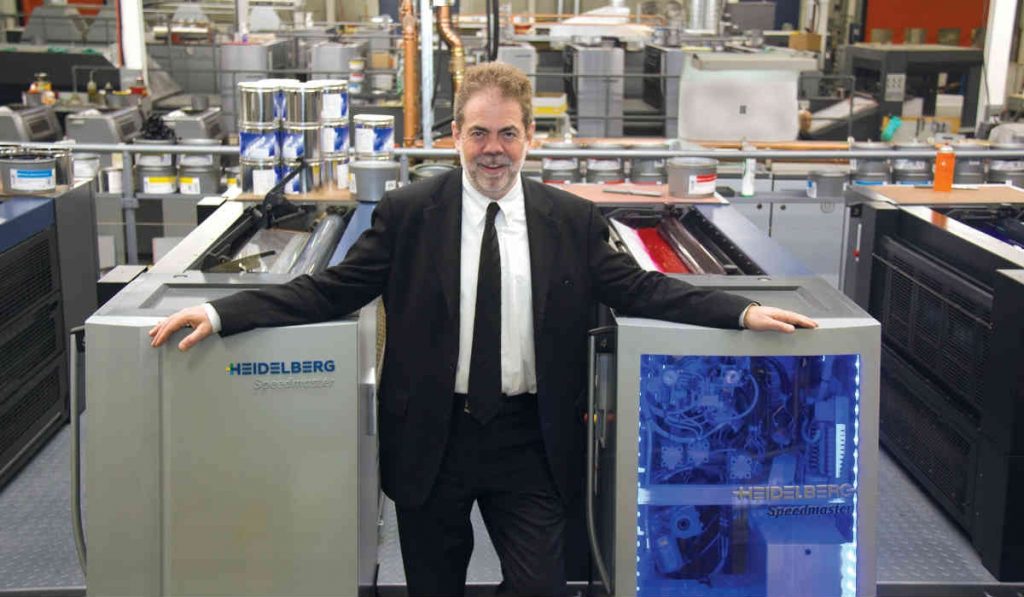 Jay Mandarino in March 2017 began his largest business venture in what has been a storied printing career that began as CJ Graphic Images – a brokerage proprietorship – 38 years ago in the basement of his parents’ home. Since opening his first press location in downtown Toronto in 1985, Mandarino has been on a steady path of growth toward becoming one Canada’s largest independent commercial printing operations.

Growing through acquisition, as well as by organic sales and technological investments, Mandarino took a major step toward his goal in 2014 with the purchase of a 65,000-square-foot plant, adding to two facilities controlled by what had been renamed as The CJ Group of Companies (CJG) to reflect holding more than 30 businesses. In late 2014, Mandarino pegged CJG as a $30 million operation and described his ambition to reach toward $100 million in annual revenue. Over the past 15 years alone, CJG has made more than 15 acquisitions, including the recent additions of Prime Imaging, Artwords and TPS (2014); publishing entity SBC Media (2015); and Clixx, one of the top mailing facilities in Canada, Artistic Die Cutting and Annan & Sons (2017).

In January of last year, Mandarino concluded the sale of three CJG buildings, accounting for approximately 145,000 square feet of space on 4.5 acres of land in Etobicoke, Ontario. That real-estate deal was reinvested in CJG’s new 240,000-square-foot plant, situated on eight acres, just 10 minutes away in Mississauga. “We had the opportunity to sell our three other buildings for very good money… I could of put the money in the bank and retired, but what am I going to do,” says Mandarino, President and CEO of CJG, who recently turned 57. “Two hundred and twenty people work here now and they have families.”

The move to CJG’s new Hensall Circle location began in March 2017 and ultimately involved more than 200 tractor-trailer loads, not to mention regular runs by the company’s two 5-tonne trucks and two vans. By fall 2017, CJG began operating out of the facility, today easily one of Canada’s largest commercial printing plants. “We are about $45 million right now,” says Mandarino, reaffirming his commitment to continue growing. “And now we have the capacity and the facility to do it.”

Offset innovations
Mandarino estimates the capital investment in CJG’s new facility to be more than $30 million. The cost of the building alone was just under $16 million and renovations came in at around $5.5 million, with additional moving costs of approximation $1 million. CJG also made major equipment investments that conservatively reach above $8 million.

Mandarino estimates around a third of CJG’s revenue is generated through 41-inch sheetfed offset presses, which is a relatively low number compared to other lithography-rooted shops – hinting at the diversity of CJG’s current operations. “People are looking for one-stop shopping,” he says, pointing to CJG’s range of services like screen printing, large- and small-format digital, traditional foil stamping and embossing, digital foil stamping and embossing, traditional and laser die cutting, fulfillment and distribution, and mailing and marketing services.

The company is currently in the process of setting up a car-wrap department within a couple of bays at the building’s front-right corner. “We also have an Innovation Division now dealing with holographic displays and virtual readers. We have some very creative people working here and we are very blessed.”

CJG’s lithography was boosted in November 2017 with a new 6-colour Heidelberg XL 106, adding to its existing line-up of two 6-colour XL straight presses and two 20-inch offset machines. “The XLs just produce so much. One XL is like two old CDs,” says Mandarino. CJG’s new XL 106 is equipped with an Anilox AQ coater and Inpress Control, which Mandarino is directing toward Heidelberg’s new Push To Stop operating philosophy. Push To Stop allows a press to initiate a series of print jobs that are properly queued by Prinect software, which also relies on the new Press Center XL 2 console, Intellistart 2 and assistance systems like Intelliguide.

Depending on ink lay-down and imposition, print jobs can run consistently without operator intervention. The technology platform can leverage colour management tools to reach specified Delta levels and tagging systems in the press delivery. “The new technology is unbelievable, Push To Stop – the ability to set inline spectrophotometry and recalibrate sheets, how it is done automatically at 18,000 sheets an hour. The press operators love it,” says Mandarino. “It is the way the industry is going and we do a lot of similar jobs in different industries that we specialize in, so it is not a problem.” CJG also invested in Inpress and Push To Stop controls to retrofit its second XL press, while the third XL is being equipped with UV.

“They are very unique machines. They have the newest technology in the sense that they have opaque white, which is amazing especially if you are going to print on black stocks,” says Mandarino. “We have a lot of clients who are still very, very fussy and they want that specific PMS colour and we are so close now. We actually changed over about 20 percent of our clients who were doing traditional litho stationery to digital.” In February, CJG finished upgrading one of its Xerox presses to run gold and silver metallic.

The Tauro H2500 is a 100-inch wide hybrid LED UV printer with an integrated roll-to-roll system. It is designed to reach speeds of up to 2,960 square feet per hour and can feed a range of media including corrugated board. The Tauro’s automated board feeder (ABF) can process up to four boards automatically and its white ink capability expands applications to backlit POP or for using white as a spot colour. CJG’s new Jeti Ceres RTR3200 LED, aimed at higher-quality work, reaches speeds of up to 2,002 square feet per hour. The 126-inch-wide, roll-to-roll system provides six colours plus white to enhance the opacity and boost colour contrast.

The Hensall Circle facility also holds one of North America’s most advanced digital finishing departments after CJG in 2015 installed North America’s first Scodix Ultra Pro with Scodix Foil. The system is designed for producing cost-effective foil with run lengths from one up to 10,000, enhancing a range of products like packaging, brochures, business cards, invitations and book covers.

This Scodix purchase came a week after CJG announced its Canada-first acquisition of a Highcon Euclid II+ system, described as the first fully digital cutting and creasing machine for converting paper, labels, folding carton and micro-flute. It incorporates Highcon’s patented Digital Adhesive Rule Technology (DART) and polymers to produce creases, as well as high-speed laser optics to cut a range of substrates.

“It takes a while to build up the market for it, there is no question, but I can tell you we have two major accounts – one out of the U.S. and one out of the UK – because of those machines,” says Mandarino. “We are looking at upgrading to the [Highcon] Beam now, which does, I think, 5,000 sheets an hour – we are doing 1,200 to 1,500 now – to get into some bigger packaging runs.”

The Scodix and Highcon sit across from each other in a dedicated room filled with unique print samples, which are in fact a common sight throughout the entire Hensall Circle facility. “We are very sales driven and we have always invested in technology and it has made us successful,” says Mandarino. “You have to find new stuff all of the time.”